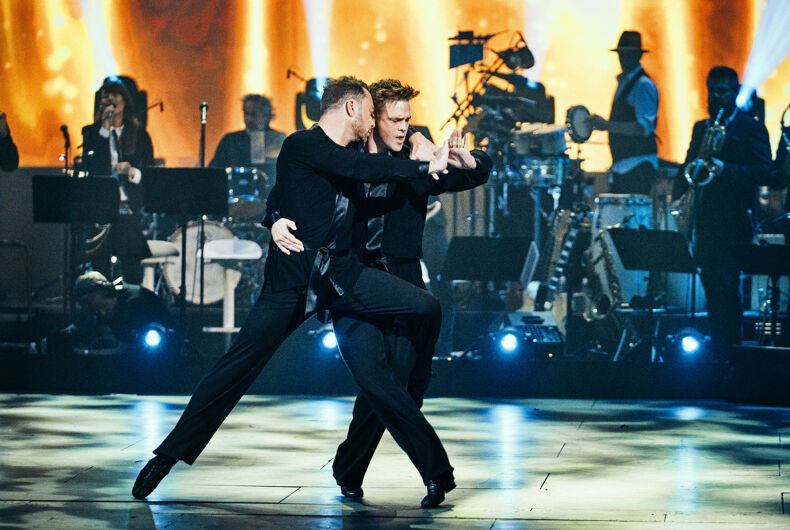 Jakob Fauerby and Silas Holst tear up the floor on Dancing With the Stars Denmark.Photo: Henrik Ohsten/TV 2

Jakob Fauerby and Silas Holst made Danish TV history with their appearance together on Vild med Dans, the country’s version of the Dancing With the Stars franchise. Now the first same-sex couple to appear in the franchise has waltzed away with the prize.

“Not in my wildest dreams did I anticipate this,” Fauerby, a Copenhagen-based actor told LGBTQ Nation before the winning performance. He said that his goal all along, aside from becoming a better dancer, was to show people that same-sex dancing was something they could tolerate.

Related: The first male couple on Denmark’s “Dancing with the Stars” is stirring up controversy… & winning

Fauerby insisted on dancing with a male partner as a requirement for his participation. Holst, a show favorite, returned from a five-year hiatus to be Fauerby’s dance partner.

“I had already thought that if they called me, I would ask if it was possible to dance with a man,” Fauerby told LGBTQ Nation. “So, when they called and I asked, they said it was probably something they could talk about.”

Even in liberal Denmark, the news that the wildly popular show would feature two men dancing sparked controversy among some long-time fans. The criticism ranged from the ugly, like those that complained about how it was “unnatural,” to laments about how few beautiful dancing gowns the season would showcase. Others wondered who would be “the man” and who would be “the woman.”

Through it all, Fauerby maintained a positive outlook, confident that what he was doing was good for his fellow Danes – especially his fellow LGBTQ siblings.

“For me, in my living room, when I dance at home, I dance with a man,” Fauerby said. “When I was a child, I never saw representation. We’re just one couple out of 160 in 16 years. So for me if a young boy, girl, or trans person has the opportunity to see that positive representation as part of a TV show that is empowering in itself.

Pete Buttigieg has been ringing the bell for the Salvation Army