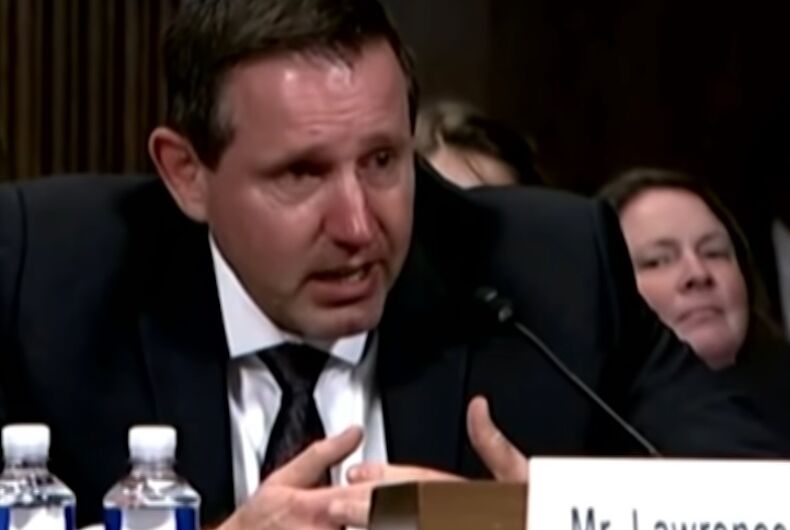 A federal judicial nominee who started crying when questioned about his anti-LGBTQ record has just been confirmed by the Senate to a lifetime appointment to one of the most powerful courts in the country.

The Senate voted to confirm Lawrence VanDyke to the 9th U.S. Circuit Court of Appeals yesterday with a 51–44 vote. Every Republican except for Sen. Susan Collins (R-ME) voted in favor, while every Democrat voted against him or didn’t vote.

Related: Trump is stacking the federal judiciary against us for decades to come

VanDyke is the former solicitor general for both Nevada and Montana and he deemed “unqualified” for the federal bench by the American Bar Association (ABA).

The ABA interviewed people who had worked with him and came to the conclusion that he was “arrogant, lazy, an ideologue, and lacking in knowledge of the day-to-day practice including procedural rules.”

They also said they were concerned he “would be fair to persons who are gay, lesbian, or otherwise part of the LGBTQ community,” citing his history of opposition to LGBTQ equality, columns he wrote which said that LGBTQ rights “will hurt families, and consequentially children and society,” and his pro-bono work for the anti-LGBTQ hate group Alliance Defending Freedom.

Sen. Josh Hawley (R-MO) asked him if he is anti-LGBTQ during confirmation hearings this past October, and VanDyke started crying.

“I do not believe that,” VanDyke said.

“It is a fundamental belief that all people are created in the image of God. They should all be treated with dignity and respect, Senator.”

“I would not have allowed myself to have been nominated for this position if I did not think I could do that, including members of the LGBT community and any other community that has been historically disadvantaged in this country,” he added.

Seven of Trump’s federal court nominees have been deemed “not qualified” by the ABA.