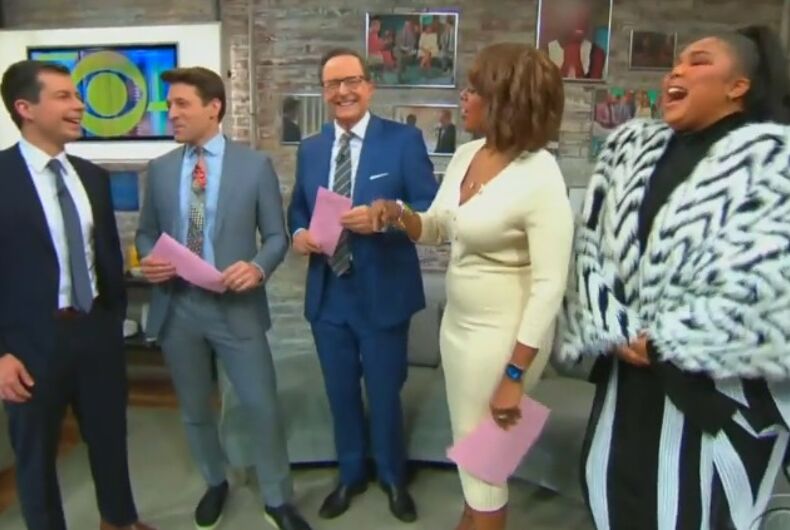 Lizzo and Pete Buttigieg with the hosts of "This Morning"Photo: CBS/screenshot

2020 Democratic presidential hopeful Pete Buttigieg and Lizzo were on CBS This Morning and it turns out that Mayor Pete is quite the fan of Lizzo.

They were on together with the show’s hosts to tease their upcoming segments, and Gayle King asked Buttigieg: “Mr. Mayor, what are three words that would best describe you?”

Lizzo got asked the same question and she answered like a star: “Glamorous, talented, and bootie-ful!”

King asked Buttigieg if he has “had any DNA tests recently?” It’s a reference to Lizzo’s “Truth Hurts,” where she sings: “I just took a DNA test, turns out I’m 100 percent that bitch.”

“Yes, and I’m 100 percent that nominee to lead the way to the future!” Buttigieg joked.

“I got chills,” Lizzo responded.

What are three words that describe you right now? — @GayleKing

While it’s clear King was setting Buttigieg up for a joke, he had to get the reference to have that comeback. So the question now is whether it’s Pete or Chasten who’s blasting Cuz I Love You in their house in Indiana.

Lizzo has been nominated for eight Grammy Awards this year, including Best Pop Solo Performance, Record of the Year, and Song of the Year for “Truth Hurts.”