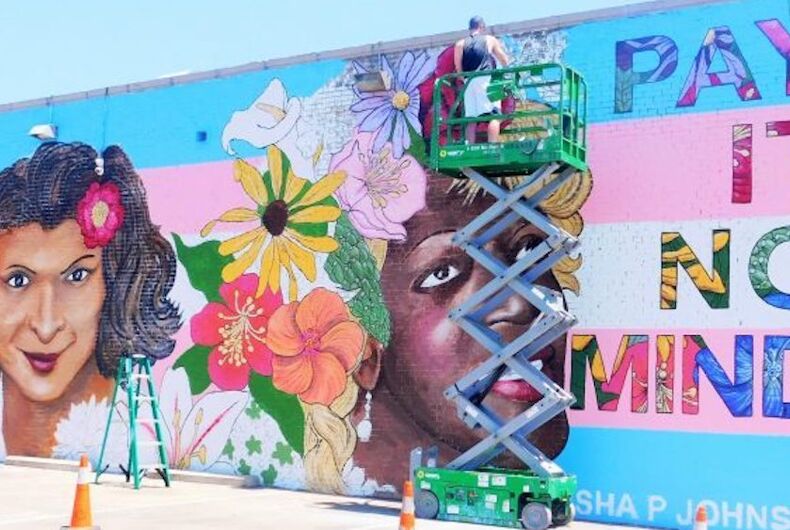 “We will start cleaning the mural by Wednesday when the graffiti cleaner arrives,” said Jerome Larez from Artitude, the progressive art group that helped create the mural.

The mural, which is located in Dallas’ gay Cedar Springs strip and is the largest in the world honoring the trans people, was completed just before this last Pride month in commemoration of Stonewall’s 50th anniversary and the many Texas trans women who’ve been targeted for violence in the past few years.

New York artist Brian Kenney painted the mural earlier this year. It shows the colors of the trans flag with images of Rivera and Johnson and a quote from each. At the time of its creation, Kenney told the local NBC News affiliate:

I had Marsha looking up and next to her is a very famous quote of hers – “pay it no mind,” because she was always above it all. She never let anything get to her. She was accepting of everybody. I had Sylvia Rivera looking right at the viewer because she was the one who was always in your face – screaming into the microphone for gay rights.

He added that he hoped the mural could serve as a bridge between the local community and trans people. Since its creation, it has been used as the meeting place for several trans-focused events.

The mural was commissioned by Artitude, a not-for-profit organization that raises the visibility of marginalized communities through art.  The Dallas Police Department is asking anyone with information about the vandal to call in a tip at at 214-670-4413.

At least 15 trans people have been killed in Texas since 2015. Police made arrests in 12 of the cases, and eight of the victims were sexually involved with their killers, according to the Dallas Morning News.