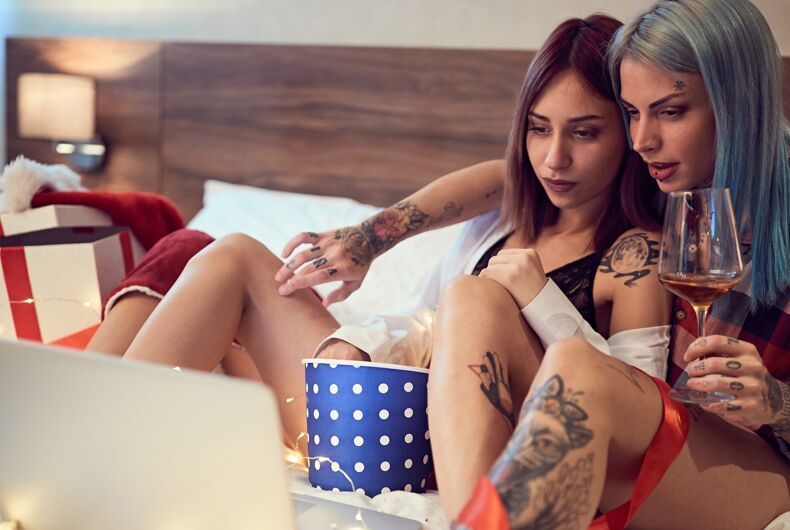 Hallmark is currently struggling between simple representation of LGBTQ people and catering to its “base” of conservatives, and other networks such as Lifetime and Netflix are not rushing to make one either.

So many people are wondering when – or if – we’ll get a holiday movie with characters that are not exclusively heterosexual or cisgender.

Luckily, there are already some in existence. These following holiday-themed films feature gay or lesbian people in relationships or finding love – plus they’re available on DVD and streaming services such as Amazon Prime and Dekkoo.

In Foster’s second turn as a director, Claudia Larson (Holly Hunter) relies on her gay brother and confidante, Tommy (Robert Downey Jr.), when she has to go home for Thanksgiving after losing her job and disconnecting with her daughter, Kitt (Claire Danes). We later find out that Tommy married his boyfriend, Jack (Sam Slovick), in secret – much to the devastation of their mother, Adele (Anne Bancroft).

This film features Adamo Ruggierio in his first non-Degrassi film release as Nathan, the out boyfriend of Gunn (Keith Jordan), who is still in the closet. Nathan surprises Gunn during the holidays in his small Wisconsin town, which threatens his social standing with his friends and the life he has grown accustomed to with his family.

Rob Williams’ latest film after the aforementioned Make the Yuletide Gay, this film is an intersecting plot of stories featuring gay men between Christmas and New Year’s – including one closeted man sharing a bed with his crush, a married couple welcoming an abandoned teenager into their home, and a hookup that develops into something more.

Described as “the Love, Actually for Queer Women” by The Advocate, this film follows an ensemble of women figuring out their love lives during the “hectic holiday season” between Christmas and New Year’s Day.

A city canceled its Christmas parade instead of banning Confederate flags