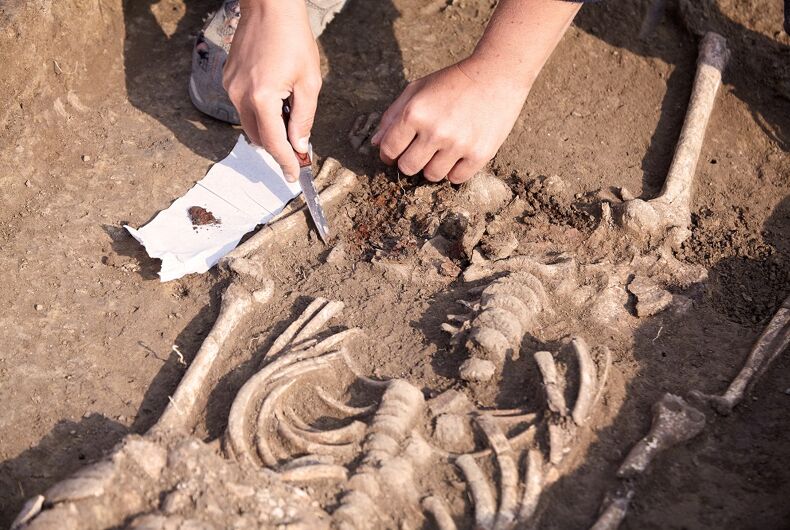 Archaeologists have discovered “female” remains in an all-male monastic community in Mount Athos, Greece that has banned women and even female animals (except for cats) since the 10th century.

The remains – which were beneath the stone floor of a Byzantine chapel – are believed to be the first-ever female remains found there, leading some to wonder whether an important woman died on the land or whether a transgender man might’ve been among the mountain’s earlier monks.

Archaeologists say they found a forearm, shinbone, and sacrum (tailbone) that were shaped differently from the remains of six other men buried under the chapel floor.

Phaidon Hadjiantoniou, the architectural restoration expert who discovered the remains while conducting conservation efforts at the historic chapel, said that the remains had been moved from another burial site and wouldn’t have been relocated under the chapel floor unless they belonged to especially important people, reports The Guardian.

Hadjiantoniou said that the monastery might’ve occasionally opened their doors to women during pirate raids and hostile incursions, “but it is very rare,” he said.

“There is a famous tale of a Serbian king who brought his wife to Athos,” Hadjiantoniou added, “but, throughout, she was carried and never allowed to step on Athonite soil. Carpets were placed in all the monastery rooms to ensure that even there she didn’t touch the ground.”

Even though the European Union has declared the region’s banning of women illegal, the ban is “vigorously upheld” to this day.

Archaeologists are now carbon dating the remains to figure out how old they are. But they’re just the most recent set of human remains that could belong to members of the LGBTQ community.

In September 2019, researchers found two bodies that were buried holding hands near Bologna, Italy in the 4th or 6th century; the bodies are thought to belong to two men.

In April 2011, researchers discovered the grave of what was referred to as a “gay caveman” from around 2500 or 2900 B.C. The grave contained a man’s body buried with tools and items normally entombed with women.

A December 2018 study of 51 tombs at Hasanlu, an ancient burial complex in what is now northwestern Iran, found a 3000-year-old burial site for transgender people.