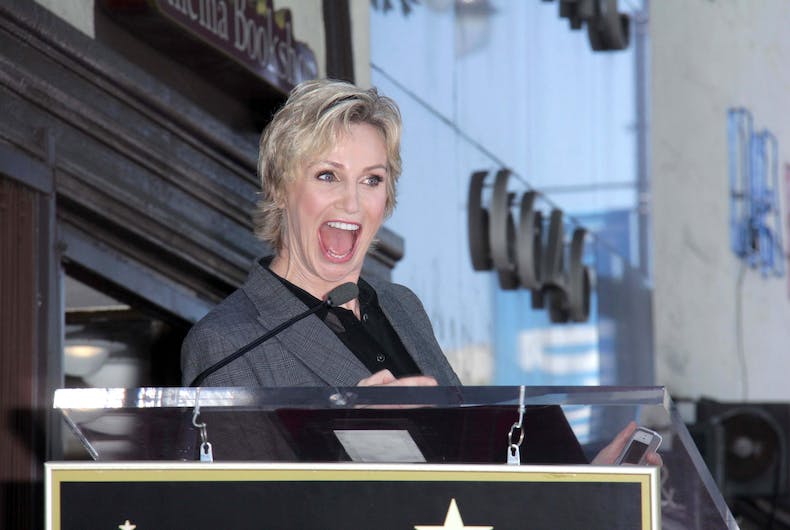 Actor Jane Lynch gets her official star on the Hollywood Walk of Fame in Hollywood, CA in 2013Photo: Shutterstock

In a tweet, the out comedian appears to defend Buttigieg from an attack by rival candidate Sen. Elizabeth Warren (D-MA) that he accepts money from “billionaires.”

Related: If Pete Buttigieg wins the primary, Democrats need to rally behind him

“Hello everyone,” Lynch tweeted. “Billionaires in wine caves have as much right to say who gets to be president as waitresses in diners and plumbers in my bathroom. Class warfare is ugly, @ewarren.”

Lynch’s tweet was met with immediate scorn. Some wondered if Lynch was being sarcastic, but other people on Twitter found “proof” that she was serious because the actor donated more money to Buttigieg’s campaign than Warren’s.

In a subsequent tweet, Lynch joked that she had accidentally brought the wine cave back into the public eye.

But for everyone who charged that Lynch was pro-Pete and in his pocket, an hour later she pointed out another candidate she found presidential – Sen. Amy Klobuchar (D-MN).

Hello everyone. Billionaires in wine caves have as much right to say who gets to be president as waitresses in diners and plumbers in my bathroom. Class warfare is ugly, @ewarren Thanks for listening everyone.

Ahh yes. Why won’t we think of those beleaguered billionaires maniacally controlling the world while living in excess luxury and privilege. Their voices must be heard too. #billionairelivesmatter

do you, a functioning adult, actually believe that billionaires and waitresses currently have equal power to choose their elected officials?

And the dying embers of what was the wine cave meme is gently blown back to life.

Bouncer refused to kick out man shouted at gays: “Homophobia isn’t a crime”