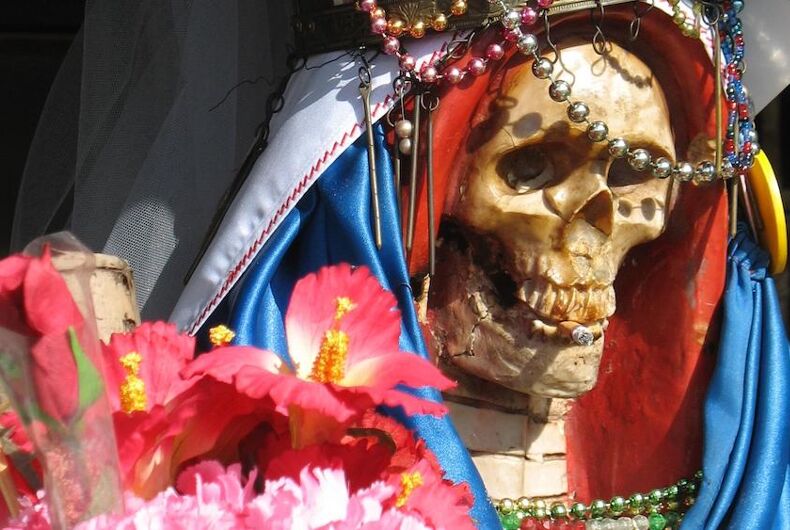 The Catholic religion has more than 10,000 saints — mostly because they were bastardized from older pagan dieties — and each one is dedicated to their own particular realm, like Barbara, patron saint of explosive devices, and Bibiana, patron saint of hangovers… so it’s hard to keep track of them all.

That’s why bishops in New Mexico has recently had to re-remind practicing Catholics not to revere La Santa Muerte — a gay-friendly, Grim Reaper-like figure known as “Our Lady of Holy Death” — because she’s not an officially Church-sanctioned saint.

Andrew Chesnut, author of Devoted to Death: Santa Muerte, the Skeleton Saint, says that the unofficial folk saint — also known as La Niña Blanca, La Madrina, or La Flaca (The White Girl, The Godmother or The Bony Lady) — has millions of devotees, particularly Latin Americans, immigrants in the U.S. and Latinx sex workers.

Unlike other saints, she doesn’t represent a deceased person but rather the literal embodiment of death. She is considered “a supernatural healer, love doctor, money-maker, lawyer, and angel of death” and “her statuettes and paraphernalia now outsell those of the Virgin of Guadalupe and Saint Jude, two other giants of Mexican religiosity,” according to Chestnut.

Popular in Mexico and sometimes linked to drug cartels, La Santa Muerte in recent years has found a diverse following north of the border: immigrant small-business owners, artists, gay activists and the poor, among others — many of them non-Latinos and not all involved with organized religion. Shrines and statues of the skeleton figure — typically depicted wearing a black nun’s robe and holding a scythe — can be found in New Mexico, California, Louisiana, Texas and elsewhere.

People pray to Santa Muerte for all manner of otherworldly help, from fending off wrongdoing and exacting revenge to landing better jobs and stopping lovers from cheating. Others seek her protection for their drug shipments and to ward off law enforcement.

Santa Fe Archbishop John Wester recently told locals not to worship La Santa Muerte, saying that her popularity misleads true believers seeking answers. Wester said she cannot be a true saint because “Our devotion is to the God of life.” Other Catholics literally consider La Santa Muerte “a demon.”

If you’re curious about La Santa Muerte, you can here Chestnut talk more about her cultural significance below: