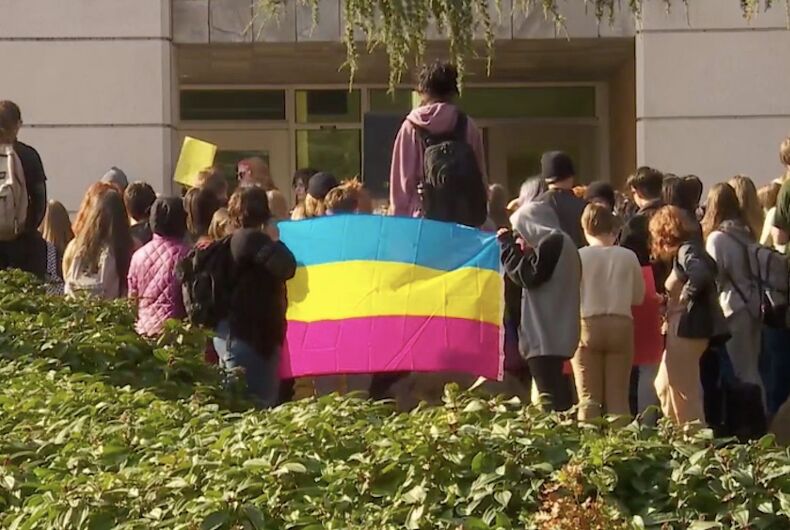 The Gay-Straight Alliance of West Linn High School in northwest Oregon organized a walkout of roughly two dozen students last Friday to protest homophobic harassment by fellow classmates and the presence of a Chick-fil-A food truck at the school’s football games.

During the protest, 25 parents and family members stood across the sidewalk from students to show their support for the walk-out. Another group of students walked out of school the same day wearing “Make America Great Again” hats and waving Chick-fil-A bags around to mock the protesting students, KATU News reports.

Related: Chick-fil-A offered a school a free lunch. The principal rejected it to support LGBTQ teachers.

The protesting students said anti-LGBTQ bullying has made them feel unsafe in classes and school football games. They also opposed Chick-fil-A’s past support of anti-LGBTQ causes.

While the school has pledged to reconsider its vetting process for future food vendors, it says the Chick-fil-A food truck will remain for now. Chick-fil-A was chosen by the school’s booster club to vend food at this season’s football games.

Kilstrom added that the school wasn’t aware of any recent accusations of anti-LGBTQ harassment by other students, but acknowledged that the issue was one that school officials have had to work on in the past.

Chick-fil-A’s history of homophobia includes opposition to same-sex marriage and millions in donations to anti-LGBTQ organizations. The restaurant recently defended its donations as its response to “a higher calling.” The restaurant is owned by Christians, hence it being closed nationwide on Sundays.

An October 2019 protest by LGBTQ protestors against England’s first Chick-fil-A helped shut down the restaurant barely a week after it opened.

Here is video of the West Linn High School student walkout and protest:

Students are walking out at West Linn High School. They say the school's current culture is not safe for LGBTQ+ students.

Students are walking out at West Linn High School. They say the school's current culture is not safe for LGBTQ+ students.