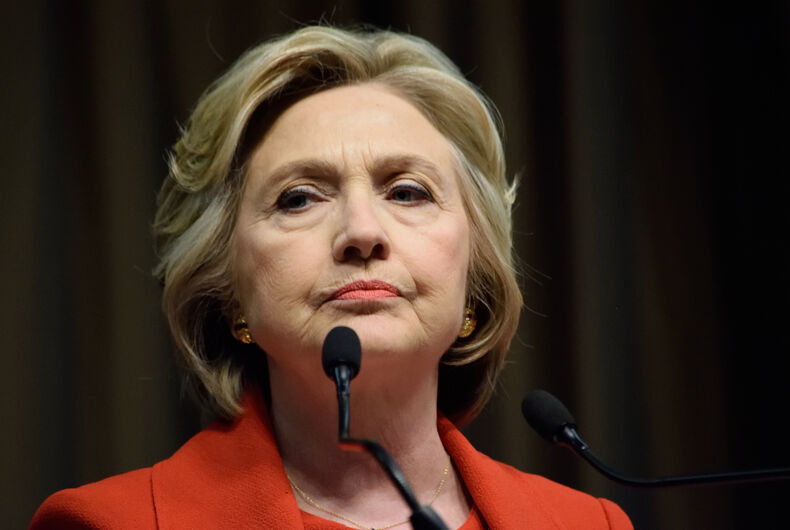 Hillary Clinton said in an interview this past Tuesday that there are “legitimate concerns” for cisgender women if transgender people get more acceptance.

She and Chelsea Clinton talked to the BBC’s Mishal Husain to promote their new book, The Book of Gutsy Women, which is made up of profiles of courageous women.

Husain asked about Virginia Delegate Danica Roem (D), who is profiled in the book. Roem is the first transgender person elected to a state legislature in the U.S., and Chelsea Clinton gushed over her.

“I find her so inspiring and gutsy,” Chelsea Clinton said of Roem.

But then Husain turned to Hillary Clinton and asked her if she found it “difficult” to accept someone who “self-defines” as a woman.

Hillary Clinton did not explain why recognizing transgender people as the gender they identify as takes anything away from (cisgender) women’s lived experience.

“This is all relatively new,” she continued. “People are still trying to find the language for it, trying to sort it out. I think in the right mindset this can be understood, but it’s going to take some time.”

Several weeks ago, Hillary Clinton made similar comments in an interview with the Sunday Times when she was asked several transphobic questions by journalist Decca Aitkenhead. While discussing Roem, Aitkenhead brought up a hypothetical trans woman “with a beard and a penis.”

“I think you’ve got to be sensitive to how difficult this is,” Hillary Clinton said. “There are women who’d say [to a trans woman], ‘You know what, you’ve never had the kind of life experiences that I’ve had. So I respect who you are, but don’t tell me you’re the same as me.’ I hear that conversation all the time.”

As Secretary of State, Hillary Clinton made it easier for transgender people to update the gender marker on passports. In 2016, she slammed North Carolina’s HB2, a measure that restricted transgender people’s bathroom access and banned local governments from passing LGBTQ-inclusive civil rights laws. On her presidential campaign website, she promised to “work to protect transgender individuals from violence, make it easier for transgender Americans to change their gender marker on identification documents, and invest in law enforcement training focused on fair and impartial policing.”