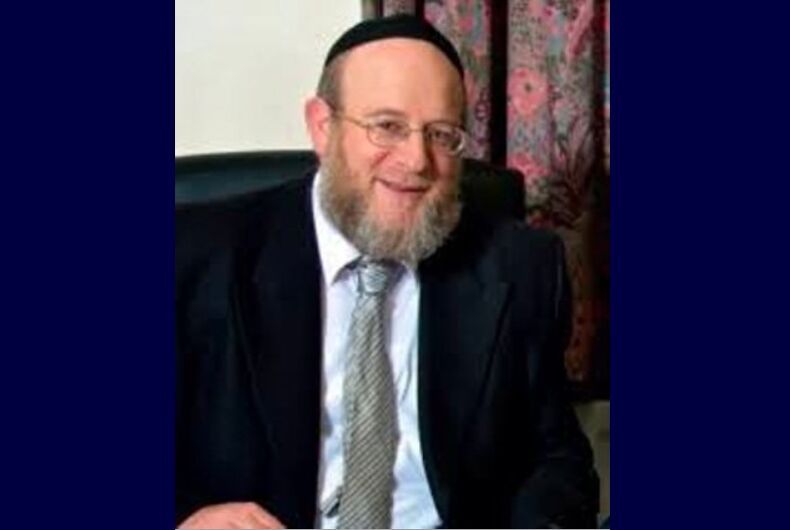 Gavriel Krausz — an Orthodox rabbi and religious judge who enforces community religious law in Manchester, England — has directed Orthodox Jewish parents to give up their lives rather than comply with a U.K. government law directing schools to teach about same-sex relationships.

Earlier this year, the U.K. Government declared that all government-funded schools must include lessons in “relationship, sex, and heath education classes” acknowledging the existence and equality of same-sex relationships and LGBTQ people by September 2020. That includes religious schools that receive government funding.

Related: Republican claims that stopping LGBTQ equality is like saving Jews from the Holocaust

In a flier circulated to parents of children in Orthodox Jewish schools, Krausz wrote:

One is obliged to give up one’s life rather than comply as our ancestors did throughout the generations.

Even if by refusing to comply with this shameful law, the authorities will, G-d forbid, close down the school and imprison those who do not abide by this law, one is not allowed to give in one iota.

The flier added, “[If] we capitulate and give in, we can chas vashalom [Heaven forbid] say goodbye to the next generation.”

However, Krausz is being over-dramatic. The government hasn’t made any threats to fine, shut down, or imprison school administrators who refuse to comply with the new directive, nor does any mention of such penalties exist in the Department for Education’s guidelines on the matter.

That is, there’s nothing sexually explicit or objectionable in the new directive for school lessons, merely a recognition of the political and social reality around LGBTQ people.

Furthermore, the guidelines state that “schools should make decisions about what is appropriate to teach on this subject based on the age and development of their pupils and should involve their parents in these decisions, informing them clearly and in a timely manner about what and how their pupils will be taught.”

However, amid parent protests at Birmingham schools earlier this year — some of which resulted in death threats against faculty — U.K. Education Secretary Damian Hinds said that school administrators “should consult parents but reassured them parents had no right to veto what was taught.”