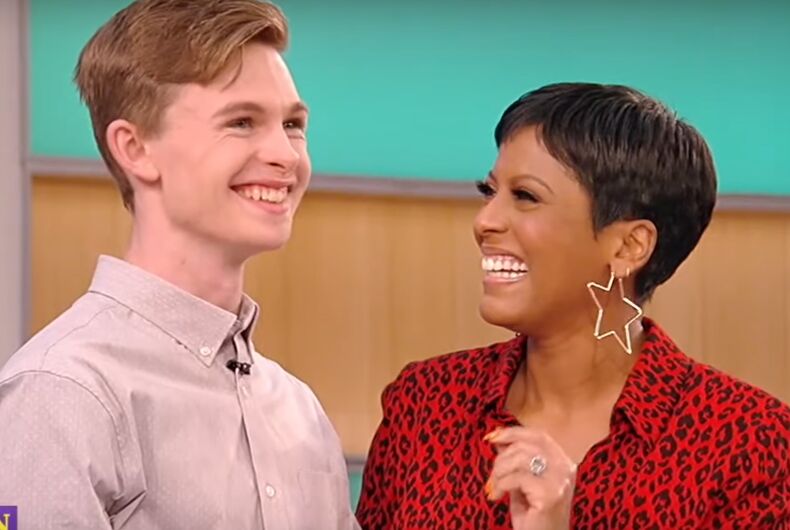 Jordan Steffy – the bullied gay teen who went viral when he punched one of his tormentors – is leaving his school and will be home schooled.

Steffy is a junior at LaPorte High School in Indiana, and he told Insider that he had been relentlessly bullied since he came out in seventh grade. A classmate posted a picture of him with anti-gay slurs to Snapchat, which led to the confrontation in the viral video.

This is the fight 😶 pic.twitter.com/DAsehv9I4m

Steffy was suspended after the fight and he is now being home schooled after his mother saw how he was being treated at school.

Steffy has appeared on Tamron Hall’s show earlier this week to talk about the incident. He said that he didn’t know the other student in the video, but that someone else showed him a screenshot of the student’s hateful message.

He approached the bully before class started and asked him about the post, and the bully said, “It’s just a post…. What are you going to do about it?”

“When you shoved him first, was that about him, or just years of this, and he’s the breaking point?” Hall asked.

“It was years and years, over and built up,” he responded.

In the next segment, he said he’s leaving the public school.

“You’re put in a situation now where you’ve got to be the one to say goodbye to your friends,” Hall noted.

Steffy has previously said that he chose not to report the bullying anymore since the school did nothing to stop it.

“It seemed like I was getting in more trouble for reporting [the bullying] than I was if I didn’t say anything at all,” he said. “It was doing me more harm than it was good.”

A GLSEN survey last year found that 20% of LGBTQ youth have switched schools at least once to escape bullying, and one out of three LGBTQ students has missed at least one day of school in the previous month because of bullying.