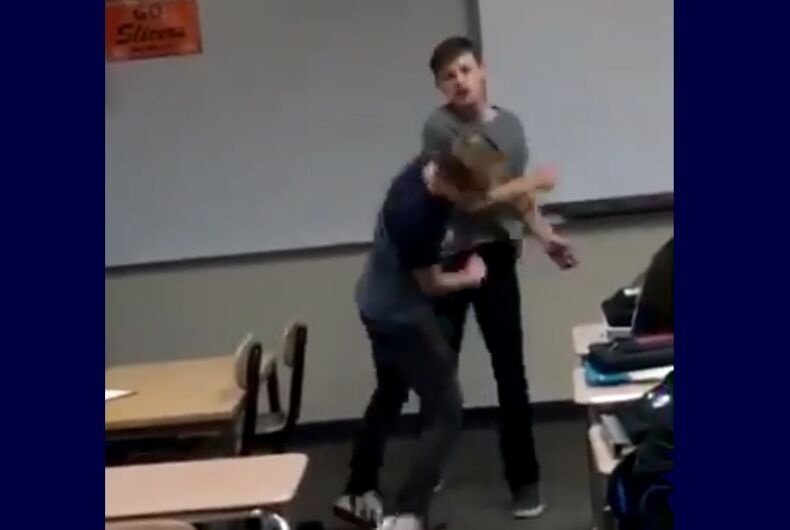 A video showing a bullied gay teen punching one of his tormentors has gone viral.

Jordan Steffy is a junior at LaPorte High School in Indiana, and he says that homophobic students have been bullying him since he came out in seventh grade, throwing food at him and calling him slurs.

Related: A gay teen who was brutally bullied for years stabbed one of his attackers. He’s going to prison.

One student in particular posted a picture of him on Snapchat and wrote an anti-gay message.

“He made an anti-gay post with a picture of me on it saying how he hated gays and a bunch of throwing up emojis all over it,” Steffy told Insider.

That’s when Steffy confronted the bully.

“I walked up to him and said ‘Why did you post this?’ He said, ‘It was just a post.’ And I said, ‘Well, it’s not just a post. It’s a post about me, saying how you dislike who I am, and I don’t appreciate that,'” Steffy said.

He posted a video of the confrontation to Twitter.

“Back the fuck up out of my face, now,” Steffy can be heard saying. “Cause I’m not playing with you.”

“Why you in my face, faggot?” the bully replied.

“Don’t fucking play with me,” Steffy said, pushing the bully.

“Don’t fucking put your hands on me, faggot,” the bully said. He didn’t try to leave.

This is the fight 😶 pic.twitter.com/DAsehv9I4m

And here’s video someone captured from another angle.

Y’all ever wonder what’s going on at your old high school too? pic.twitter.com/FiCZw8y6ir

“I just got sick of it,” Steffy later said. “It’s crazy the amount of hatred I received just for liking who I like and being me.”

He said that he was suspended for hitting the other student and had to miss a school dance.

But he said that he was proud for standing up for himself.

“It seemed like I was getting in more trouble for reporting [the bullying] than I was if I didn’t say anything at all,” he said. “It was doing me more harm than it was good.”

The school’s administration is not commenting on the incident.

The video has been viewed over two million times on Twitter and liked over 110,000 times.