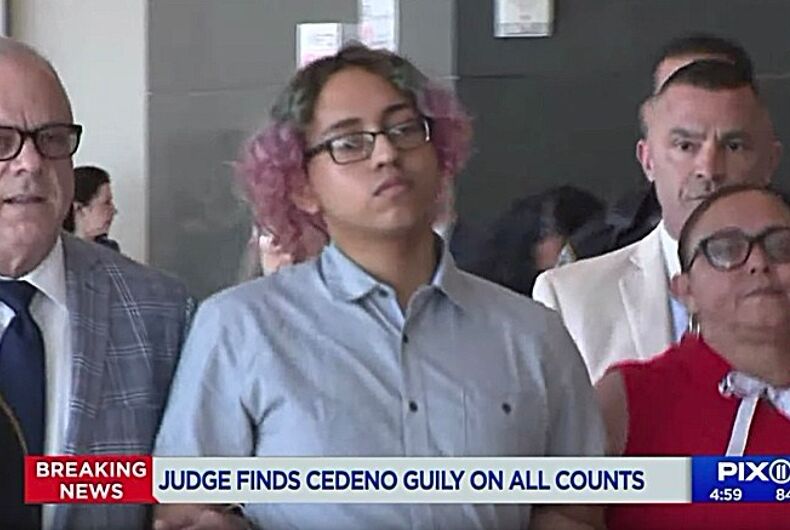 A gay teen who stabbed a classmate to death and critically wounded another after they allegedly bullied him for years was found guilty of manslaughter.

Cedeno stabbed McCree in the chest, and he died in a hospital from the wounds.

Cedeno was charged with first-degree manslaughter, first-degree assault, and criminal possession of a weapon for the switchblade he brought to school. He waived his right to a jury trial, leaving the judge to rule on the facts in the case.

During the trial, he said that he was bullied since sixth grade, often for his sexuality. He was beaten and they called him anti-gay slurs.

He said that he and his mother tried to get the school district to transfer him to a safer school, but they refused. He also said that school officials did nothing to stop the bullying.

Related: This male model was harassed relentlessly in high school. Now his former bully is apologizing.

By the time he got to 12th grade, the bullying was out of control. He had to repeat that year of school since he missed so much class due to bullying.

On the day of the killing, McCree, Laboy, and other students were throwing pens at him in class.

“The class was very rowdy and loudness and everything,” he said. “I just snapped.”

He said that McCree came up to him as he was leaving the classroom, pinned him against the wall, and punched him several times.

There was video evidence of Cedeno getting beaten, which the prosecution didn’t give to the defense until months after Cedeno’s arrest. Teachers also told investigators that McCree came from the back of the classroom to attack Cedeno.

“Matthew pushed me aside, hell-bent on getting at Abel,” one of the teachers said.

Another student had told investigators that Cedeno didn’t pull out the knife until he was pinned against the wall.

But most of the evidence of bullying – including the video – wasn’t admitted into court because the judge rejected self-defense as a strategy.

The defense also had trouble finding students to corroborate Cedeno’s story. The city’s Education Department opposed any effort to locate them. The prosecutors also didn’t say who their witnesses were until the day before they were on the stand, giving the defense almost no time to prepare.

The judge found him guilty of all charges.

“I got justice for my son,” McCree’s mother told reporters after the verdict was announced.

“It is so sad,” said Mustafa Sullivan of the LGBTQ youth organization FIERCE!

“There were three adults in that class. Abel is paying the price for the lack of a plan in that school to stop bullying and school violence. Both families are suffering now. Witnesses confirmed what Abel said — that he was terrorized in that classroom. The judge is saying to students being bullied that they can’t fight back — that they have to have their hands tied. Abel was trying to defend himself, but the DA wanted to make an example of him.”

Cedeno could face 5 to 25 years in prison on the first two charges, which he may have to serve consecutively.

His lawyer, though, is trying to get him youthful offender status, which could cut his time in prison.

“I’m concerned about his safety,” attorney Christopher Lynn told Gay City News. “It is important that the court grant him youthful offender status. It makes him eligible for alternatives to incarceration. He is in danger from gangs. If something happens to him in prison, a lot of people will share responsibility for it.”

Cedeno, who was out on bail during the trial, has been sent to the LGBTQ Unit at Rikers Island Prison Complex.

He has filed a lawsuit against the city’s Education Department, accusing the school of enabling the bullying.

Cedeno was identified as bisexual in stories about the stabbing two years ago. He has since come out as gay.

Gay Trump supporter Peter Thiel continues his nonsense, but manages to get something right

My family was verbally assaulted while walking our daughter to preschool