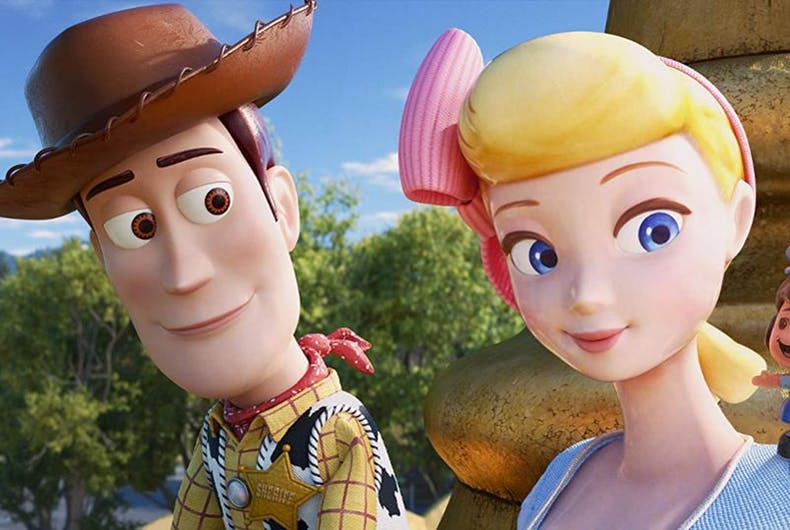 The homophobic group One Million Moms is back at what they do best, pointing out so-called injustice against heterosexuals in the name of saving their children from unnecessary exposure to same-sex anything.

This time they have sunk so low as to call for a boycott of Disney’s recent release “Toy Story 4” because of a quick scene where two lesbian parents – in the background – drop off their child at kindergarten where Bonnie, Woody’s new owner, goes to school. The same lesbian couple, get this, come back to pick up their child and their child gives them a hug. Gasp!

One Million Moms calls this animated abomination a “dangerous…promotion of the LGBTQ lifestyle.” Want to know what I have found to be dangerous through real life experience: homophobia.

About two weeks ago, my wife Margot and I were strolling our three-year-old daughter Nina to her Brooklyn preschool in Carroll Gardens when a gaunt middle-aged woman with bleached blond hair started screaming “you dykes” and “God hates you” (among other disgusting homophobic phrases about our family going to hell).

After it was over, my daughter turned around in the stroller and asked, “What happened, Mommy Jo Jo?” Holding back both tears and rage, I lied to my daughter for the first time, “Nothing, honey. Someone got mad, but everything is ok.” Everything was not ok.

Thankfully, my daughter’s preschool is amazing and inclusive. The teachers ask us on Father’s day if our daughter wants to make a card for her uncle or grandfather, and Nina colored two Mother’s (Mothers’) day cards. The other students know Nina has two mommies and they don’t think anything is strange about it.

But when I dropped Nina off that day, my whole body was shaking. My fingers fumbled with the push buttons that fold the stroller down. I explained to one of her teachers that our family had just been harassed on the street. The teacher shook her head in disbelief and mouthed swear words. I felt relief knowing that the people there are allies.

I felt safe enough to leave Nina in their capable hands, so my wife and I hugged Nina goodbye and then walked back towards our apartment. I held on to Margot’s hand. I tried making jokes, but soon crashed from all of my efforts to push away my fear and anger.

Someone had just harassed our entire family. The family we worked so hard to make. The family I defend with my whole being.

I have learned to handle moments like this on my own before, but never with a child in tow. Over a decade ago, when my wife and I first dated and lived in San Francisco’s Mission District, a group of men threw a glass bottle as we walked past, which crashed down by our heels on the sidewalk, just missing us. I shouted at these men with a fervor that frightened my partner, and even me, but I was scared out of my wits.

Years before that, an ex-girlfriend and I drove to Cobbs Hill Park in Rochester, NY (my typically gay-friendly Upstate hometown) for an afternoon picnic. A few men, sitting a few yards away with an entire picnic table full of people, yelled that we “needed to get a real **ck inside of us.” We packed up our picnic blanket and food that we had bought for the occasion, and briskly walked back to the car while they continued taunting us.

Each of those moments were frightening and humiliating, and whether my reaction was fight or flight, I feared for my safety.

This most recent incident, however, included a new factor: I was a parent and my daughter was with me. I was more distressed than I had ever been in the past.

People who, unprovoked, express aggression against another person for his/her/their sexuality are not ok. Members of One Million Moms, or 1MM as they call themselves, hide behind laptops thinking they are somehow morally superior to strangers harassing someone, but 1MM are no better.

On their website, in their “About” statement, it says, “We want our children to have the best chance possible of living in a moral society.” Yet, these same people say that the Disney movie is “push[ing] an agenda” by “normalizing this [gay] lifestyle” for children.

Please, 1MM, give us a break. What is wrong with “normalizing” a “lifestyle” that is, in fact, normal? We are not “dangerous,” we are just like any other family out there.

We pay our bills, shop for groceries, do our laundry (ok, sometimes we drop-off), but most importantly, we take damn good care of our child. We just happen to be two parents who are the same sex. We have a legal marriage, and both of our names are on our daughter’s birth certificate. We want our child to grow up feeling safe and loved and free from fear.

We don’t seek to destroy “family values,” we uphold them.

Last night, our daughter was scared of a minor thunderstorm. She saw lightning outside her bedroom window and heard loud rumbling. “Honey, it’s just a thunderstorm. It won’t hurt you. You’re safe.” She smiled brightly, swung her arms around both of us (her signature move), hugged us close, and said “Family hugs!”

There is an entire world of cruel thunderous naysayers who want to erase my family’s existence, but it’s not going to happen. Not on my vintage Timex watch.

If family-friendly movies omit same-sex families, they essentially dehumanize same-sex families, which causes assumptions and misunderstandings that can lead to even more harassment, persecution and possibly even hate crimes perpetrated against the LGBTQ community. Does that reflect a “moral society” for children?

LGBTQ characters deserve not only to be viewed in the background, but also to be highlighted front and center. Whether you like it or not, we exist. As the old rally cry goes: We’re here, we’re queer, get used to it.

Joanna McNaney Stein is a queer mama, writer, and lecturer of English at CUNY Kingsborough Community College in Brooklyn. Samples of her creative work can be found at joanna-stein.com

A gay teen who was brutally bullied for years stabbed one of his attackers. He’s going to prison.

He was beaten after being called anti-gay slurs. Now his picture is going viral.