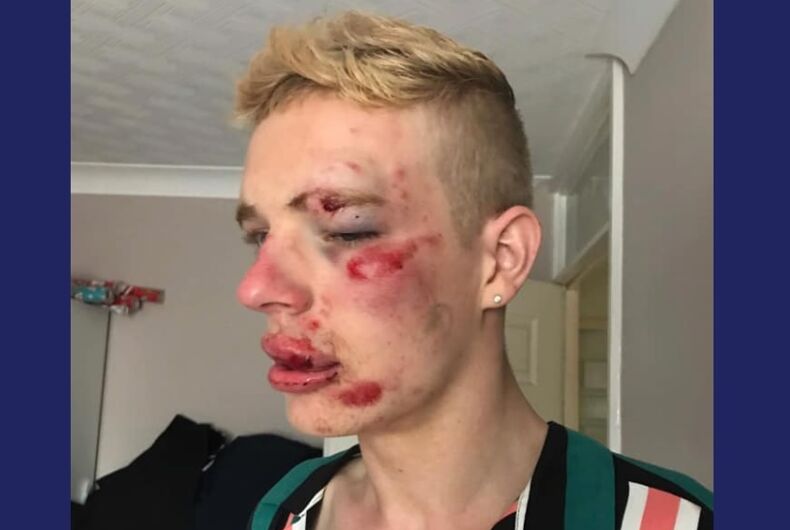 A gay man was was severely beaten by homophobic attackers, and a picture of his injuries is being shared widely on Facebook.

Ryan Williams, 22, said that he and his friends were going to a McDonalds in Preston, England, early in the morning this past Saturday when some people shouted anti-gay comments at them.

“There was a group of people nearby in the street and they started calling me and my friends gay,” he told the Mirror.

“We went over and told them it’s not okay to say things like that.”

The other group of people didn’t take kindly to being told to not be homophobic, so one of them hit Williams in the back of his head as he walked away.

He was beaten and left unconscious in the street.

A spokesperson with the Lancashire Police said that they were called at 6:30 a.m. and found that Williams unconscious. He had to be rushed to the hospital for his injuries.

Williams is now speaking out on social media.

Posting a picture of his bruised face, he wrote, “I never thought in my life that I would get beaten up for being GAY! Wtf has this world actually come too, you’re all vile and disgusting!”

“I want people to understand that being gay ISN’T a choice and I can’t help it, I’m sorry that you can’t deal with it but hey no need to knock someone out because of it! I seriously cannot believe that a homophobic attack happens! Which it does and it’s wrong!”

“Stand strong and love yourself, this isn’t gonna stop me from being fabulous! BEING GAY IS OK!”

I never thought in my life that I would get beaten up for being GAY! Wtf has this world actually come too, you’re all…

Police say that the offender ran away with two men and a woman before they arrived on the scene, and they are asking anyone with information about the attack to call them.

The assault is being investigated as a hate crime.

My family was verbally assaulted while walking our daughter to preschool