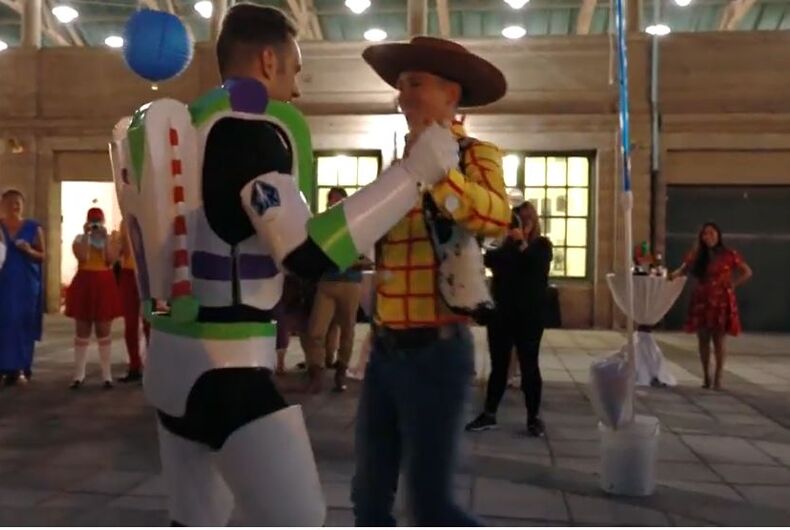 A gay couple who became engaged at Disneyland two years ago has tied the knot in the absolute best way possible. As two of their favorite Disney characters.

Chicago couple Garrett Smith and Jason Bitner donned their finest colorful suits for the nuptial portion of the event. After that, it was a reception only they could pull off. They metamorphized into Sheriff Woody and Buzz Lightyear from 1995’s Pixar hit Toy Story.

They decided on those particular characters because of their first dance selection – “You’ve Got a Friend in Me” from the film.

“Garrett wanted to dress as Buzz and Woody because ‘You’ve got a friend in me’ is one of his favorite Disney songs, and has known for a long time he wanted that to be the song he danced to as his first dance,” Bitner told Pink News. “So of course [I] had to be Sheriff Woody. Both characters are reminiscent of each of our personalities.”

They planned the wedding, although, at times it seemed to plan itself.

“About a year out from the wedding we started to get more serious about the wedding,” Bitner recalled. “That’s when we were like this is our special day we should do what we want and have the things that we like.”

The couple love dressing up for the holidays so it didn’t seem like a huge stretch to incorporate some role-playing into their wedding day.

“We love Halloween and we throw an elaborate themed party every year,” Bitner said. “We also enjoy Disney-bounding in our everyday and cosplaying at comic cons and the renaissance faire. So it was a logical decision to combine all of these things for our wedding!”

Their friend Alesha Bales choreographed their dance. Wedding photographer Tiffany Brandt shared photos on her website so that the world could gush over the coolest wedding ever.

“Jason and Garrett’s ceremony was extraordinary, hilarious and uniquely their own. After sharing funny and sweet stories from their past, a ceremonial Mai Tai was concocted and drank among the grooms. The rings were placed, the first kiss was had and the guests went wild! The love between Jason and Garrett, and the support from their friends and family was palpable,” Brandt wrote.

And get this: the parents were a part of the costumed one-of-a-kind wedding! They donned costumes from The Little Mermaid‘s Ursula and King Triton, Pirates of the Caribbean‘s Jack Sparrow and Peter Pan‘s Tinkerbell.

These Subaru ‘Lesbaru’ tweets are the reason we’re smiling today