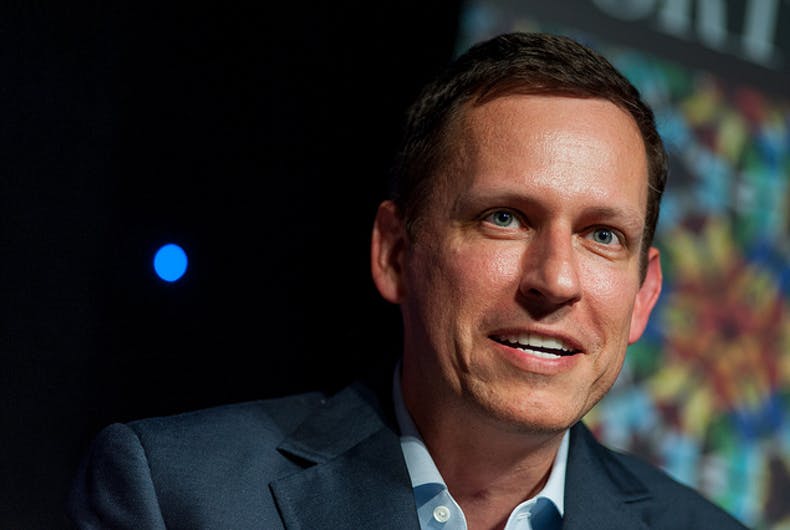 Peter Thiel, the gay billionaire who supports Donald Trump, continued his habit of saying ridiculous things, but, for once, he may be correct on at least one point.

Speaking at the National Conservatism Conference, Thiel, who also spoke at the Republican National Convention, called on the FBI and CIA to investigate Google for treason. Thiel alleged that the tech company aided the Chinese military.

He called on the intelligence agencies to ask three questions of Google top brass about being “infiltrated” by Chinese military intelligence. Thiel insinuated that the company had made the decision to cooperate because “they consider themselves to be so thoroughly infiltrated that they have engaged in the seemingly treasonous decision to work with the Chinese military and not with the US military”  after rationalizing that their technology will be stolen if they don’t.

Despite the ongoing controversy over Facebook’s role in the Russian meddling in the presidential election, he didn’t mention the company during his speech. Thiel sits on the board of Facebook.

Related: Peter Thiel may be gay, but he’s still part of the problem

Of course, it didn’t take long before Trump was repeating Thiel’s nonsense on Twitter, vowing to launch an investigation.

“Billionaire Tech Investor Peter Thiel believes Google should be investigated for treason. He accuses Google of working with the Chinese Government.” @foxandfriends A great and brilliant guy who knows this subject better than anyone! The Trump Administration will take a look!

But during an appearance on Tucker Carlson, Thiel actually did say something worthwhile. Despite using the rightwing talking point about “identity politics,” he pointed out that one Democratic candidate is particularly dangerous because they’re talking about what matter most to Americans – the economy.

“I’m most scared by Elizabeth Warren,” Thiel said. “I think she’s the one who’s actually talking about the economy, which is the only thing that I think matters by far the most.”

“I think almost all the others are equally unimpressive in the sense that it’s all identity politics of one flavor or another. I wouldn’t want to rank how unimpressive they are, since that would be forcing me to rank the different identities and which one’s more privileged and more special, and that would be a dangerous thing to get into….But I think Elizabeth Warren’s the dangerous one.”

Warren has consistently ranked in the top three preferred candidates in recent polling.

Peter Thiel just said he thinks @ewarren is the most "dangerous" 2020 Dem candidate.

Tucker Carlson, who recently hoodwinked pundits into praising him after he pretended he agreed with some parts of her platform, agreed with him. pic.twitter.com/BvNhCWPuMs

A gay man won $1.5 million in a discrimination suit against his state’s former governor

A gay teen who was brutally bullied for years stabbed one of his attackers. He’s going to prison.