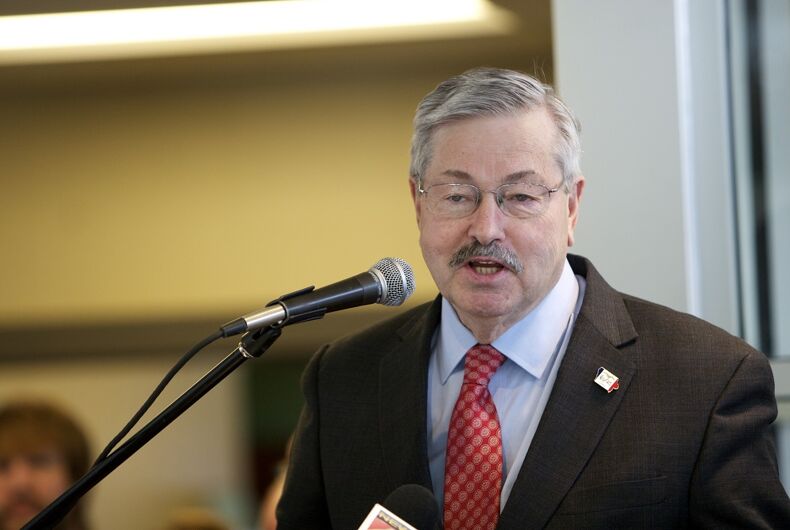 A man won $1.5 million dollars in a discrimination suit against the former governor of Iowa. A jury found that former state official Chris Godfrey was illegally discriminated against by then-Governor Terry Branstad (R) for being gay.

“This is a win for me and it’s a win for the entire gay community in Iowa,” Godfrey said after the verdict. “It shows that we have sexual orientation in the Civil Rights Act in Iowa for a reason and nobody, not even Terry Branstad, is above that law.”

Godfrey was appointed Iowa Workers’ Compensation Commissioner by former Governor Chet Culver (D). When Branstad started his term in 2011, he immediately tried to get rid of Godfrey, the lawsuit says.

Related: Jury finds that the University of Iowa discriminated against lesbian athletics official

But state law gave Godfrey a six-year term that the governor couldn’t rescind, a provision meant to keep his job outside of politics. So Godfrey refused to quit when Branstad asked for his resignation.

“Keep in mind the day after Branstad did this or it may have been the very day, I called the governor’s office and I said, ‘Restore his salary, apologize, and it will be over,'” said Godfrey’s attorney, Roxanne Conlin.

His pay wasn’t restored and he felt pressured to resign. He eventually sued, saying that Branstad targeted him for being gay. Branstad, though, said he didn’t even know Godfrey’s sexual orientation before the lawsuit happened.

“I have always treated everyone, gay or straight, with respect and dignity,” he said during the six-week trial. He said that he wanted to get rid of Godfrey because he wanted a Workers’ Compensation Commissioner more aligned with his politics.

The jury didn’t agree and found that Branstad, his lawyer Brenna Findley, and the state of Iowa violated the state’s Civil Rights Act. He was awarded $1.5 million for past and future emotional damages for discrimination, retaliation, and violating Godfrey’s Constitutional due process rights.

The state of Iowa will be paying those damages, as well as Branstad’s and Godfrey’s attorneys fees, which will be well over $1 million for the years-long legal process. Iowa Governor Kim Reynolds (R) said that she is looking at her options for appeal.

“We are disappointed in the verdict and are consulting with our attorneys,” a spokesperson said.

In the years since the lawsuit started, Branstad won reelection for governor and resigned when Donald Trump appointed him U.S. Ambassador to China.

Godfrey said that he wants an apology.

“Obviously I’d like an apology,” he told the Des Moines Register. “I don’t know if that will be forthcoming or not.”

“But I had a jury of fellow Iowans sit and listen to the evidence, and they made the determination that they discriminated and retaliated against me and violated my constitutional rights.”

“That just means the world to me that they took their civic responsibility seriously and came out with a just verdict.”

Gay Trump supporter Peter Thiel continues his nonsense, but manages to get something right