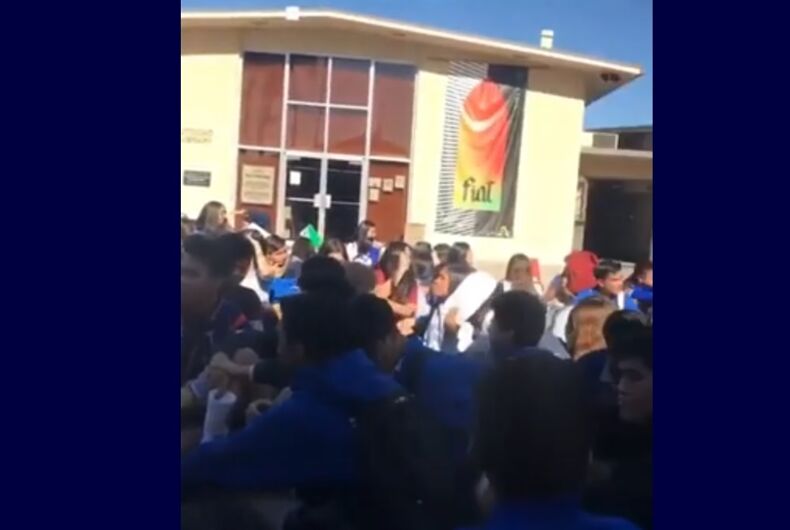 Students sat outside of Bishop Amat Memorial High School on Friday in protest of how the school treated a lesbian student.Photo: Video Screenshot

A lesbian student who was punished and tormented for years by school administration to keep her from having a girlfriend spoke out, and then 200 of her classmates staged a protest to support her.

Last week, Buzzfeed News published an article about Magali Rodriguez, who was a student for three years at Bishop Amat Memorial High School in Upland, California.

Rodriguez said that she had a girlfriend when she was in ninth grade. Even though the Catholic school has no official policy about same-sex relationships, she and the girlfriend were taken to the dean’s office and told that they couldn’t be together.

The dean told the girls that they couldn’t sit together at lunch, be near each other during their breaks, or otherwise pursue a relationship on school grounds, even though public displays of affection among straight couples at the school are common. They were also told that they had to have regular meetings with the dean and the school psychologist.

If they didn’t agree, the dean allegedly threatened to out them to their parents. They were scared and they agreed. For the next two years, they were followed by teachers, told they were going to Hell, and made to dread school and feel anxious while there.

Rodriguez eventually wrote a letter to her parents in which she came out and explained what had been happening. “It sounded like a suicide letter,” her father said. She was put in another local high school.

Shortly after that article came out, students at the school decided that they had to make a statement. On Friday, about 200 students staged a walk out.

“I never would’ve imagined Amat to be an environment like this,” said one student, who didn’t want to be named. “Once I started to read about the article I was in full shock. I decided to walk out to stand up for her.”

The student said that the principal made an announcement before lunch on Friday acknowledging the article.

“I feel as if the principal knew they messed up,” the student said. The school offered counseling services in the library for students who had questions.

After lunch, the students walked out. Another student said that teachers were there and they supervised, but they didn’t stop the students from protesting.

“I decided to walk out because I wanted to take a stand,” the second unnamed student said. “I didn’t agree with what the administration did with the situation and I feel like it was a good idea for the student body to stand as one to show our support for Magali.”

Another student said that Rodriguez is kind and didn’t deserve to be treated like she was by the administration.

“When I got to the school last year as a transfer I really had no friends, but once I met her she started to help me make friends,” the third student said. “She was one of my best friends that I can call at any time, so when I heard about all of this I texted her and once she told me that it was true then I had to do something.”

Before the protest, the school said in a statement that Rodriguez’s story was not “entirely accurate” but did not explain further, citing privacy laws. Oddly, the school pointed to its nondiscrimination statement, which does not include sexual orientation.

On Saturday, the school had issued another statement. The school’s president and principal acknowledged that “our school was portrayed as condoning a culture of non-acceptance toward LGBTQ students” in the Buzzfeed News article, but did not say that administration did anything wrong in Rodriguez’s case.

In fact, the statement appears to blame Rodriguez and her girlfriend, citing the school’s policy that bans “engaging in excessive displays of affection is not permitted by any students.” Students at the school have said that straight students regularly engage in displays of affection, while Rodriguez said that teachers would scold her for even talking to her girlfriend.

“Bishop Amat High Schoool is committed to providing a supportive and inclusive learning environment for all students, irrespective of their sexual orientation,” the statement says, adding that the school complies with “the accepted teachings of the Catholic Church,” which are that same-sex relationships are sinful because they are not open to procreation and that gays and lesbians should practice chastity.