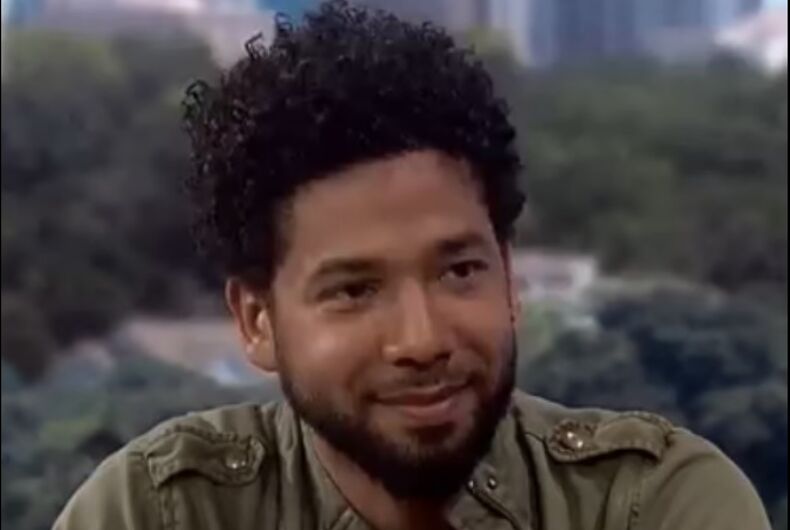 The next phase of the Jussie Smollett ordeal has just begun.

After the courts refused to dismiss the city of Chicago’s lawsuit against Smollett, in which they allege that he owed them over $350,000 in damages and wages for making a false allegation, the former Empire star is counter-suing.

The gay singer and actor who appeared as Jamal on the FOX hit drama’s first five seasons, earned national attention in January when he reported that he had been assaulted and robbed in a targeted attack. Smollett alleged that the two men had beaten and kicked him, thrown bleach on him, tied a noose onto him, and signaled that they were Donald Trump supporters before fleeing on foot. Smollett would go on to appear on Good Morning America among other shows to discuss his ordeal.

It was revealed that the Chicago Police Department, upon investigating for a few weeks, had came to the conclusion that Smollett had fabricated the events of his alleged attack. They initially denied this publicly, but Chicago Police chief Eddie T. Johnson eventually came out confirming this, revealing that his department would drop the investigation because two of the alleged perpetrators, Abimbola and Olabinjo Osundairo, claimed they were paid to stage the assault on Smollett.

Johnson later announced that Smollett was going to be arrested and punished for his supposed falsified police report. Yet, the Illinois State Attorney’s Office dropped those charges and the FBI publicly disagreed with the Chicago Police’s findings, picking up the investigation where they left off. Kim Foxx, the State Attorney for Cook County for Chicago, also admitted yesterday that her office’s “failure to communicate” was part of the reason the case “didn’t go well”.

Now, while a judge-appointed special prosecutor investigates the Chicago Police, they joined in with the city of Chicago to sue Smollett under the False Statements Ordinance. Smollett has clapped back, sending a counter lawsuit obtained by Deadline early this week. He names Johnson, the Osundairo brothers, detectives Michael Theis and Edward Eodnicki, and 10 John or Jane Doe employees of the city.

In the near 50-page filing, Smollett formally maintains his initial allegations and denies the police’s version of events. He claims that his prior relationship with the Osundairo brothers was strictly related to his fitness training, and that was what the money and communications he had shared with them was limited to, up until the attack.

As reported by Out Magazine, Smollett’s countersuit asks for an undefined amount in damages. They are requesting a trial by jury for the case so that the City of Chicago be “denied its requested relief” and he be awarded unspecified “compensatory and punitive damages.” Smollett specifically calls the allegations against him made by the Police Department as “malicious and…acted in bad faith.”

Following the heavy coverage of the story in media for weeks, Smollett essentially went radio silent for months, until he popped back in to drop a group of Pride message videos. Last month, after being blamed for Amari Allen’s recanted allegation of having her held down by white classmates while they cut her hair, Smollett claimed he “ha[sn’t] lied about a thing.”

“Y’all can continue to be misinformed, internalized sheep, who believe what actual proven liars feed you or you can read the actual docs,” he commented under an Instagram post.

Now, Smollett will have his day to prove his innocence – in civil court.