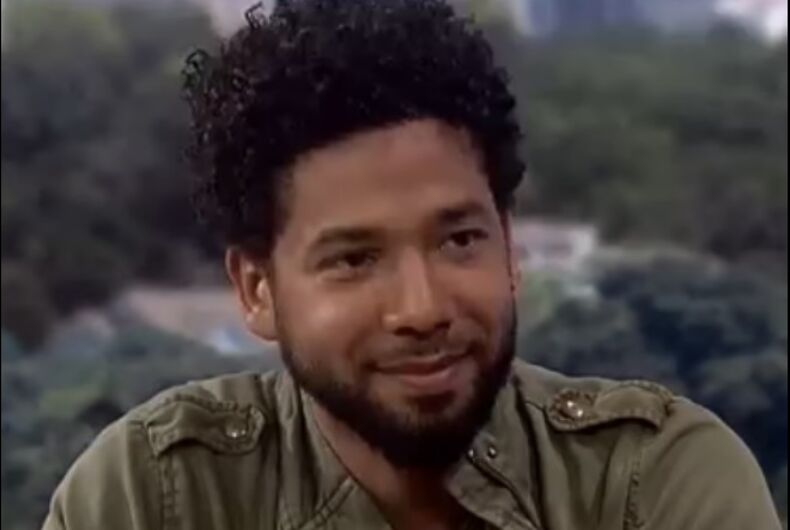 News that prosecutors dropped all charges against actor Jussie Smollett has united straight, white people from across the political spectrum in outrage.

Smollett was indicted on 16 charges related to allegedly faking a homophobic and racist hate crime against himself in Chicago this past January.

Yesterday, his lawyers announced that the charges against him were dropped in a plea deal in which Smollett agreed to two days of community service and $10,000 in court fees.

In a statement this morning, Smollett said that he has been honest about what happened since the beginning.

“I want you to know that not for a moment has it been in vain,” Smollett said in a prepared statement.

“I have been truthful and consistent on every single level since day one. I would not be my mother’s son if I was capable of one drop of what I have been accused of.”

What do you think about the way the Jussie Smollett case ended? #EbroInTheMorning pic.twitter.com/AHlzB5hx6C

Cook County prosecutors, though, insisted that there was no hate crime and that he faked it, but they also said that plea deals of this nature are “standard procedure.”

“He is not the victim of a hate crime,” assistant Cook County attorney Joseph Magats told The Today Show.

“It is not something that is unique,” he said about the deal. “It’s not the first time that this has happened.”

Straight white people were outraged by the result. On the right, commentators said that this is evidence of how Democrats don’t get prosecuted.

You can be a Democrat and get away with anything

Others said that the story proves that racism and homophobia don’t exist.

Here is the silver lining:

It finally proves that “white privilege” is a racist lie. https://t.co/zOJx2OoOP9

Piers Morgan, who never cared about hate crimes, said that Smollett “lynched the truth” because conservatives often don’t care about lynching either.

And some conservatives insinuated that the prosecutors bent to political pressure, even though plea deals are pretty common in the U.S.

Letting Smollett off the hook is a pure political calculation by Cook County. It is indeed that simple. The facts are in public view.

Even straight, white Democrats were upset by the decision. Chicago Mayor Rahm Emmanuel appeared on several television programs to say that he was mad that Smollett has not apologized and is acting like he did nothing wrong.

“He’s walking around like he’s exonerated, with no sense of remorse or contrite,” Emmanuel said on CNN. “He’s taken [hate crimes law], turned it upside-down and inside-out, used it for himself.”

Emmanuel said that no one is going to believe other victims of hate crimes because of Smollett. The mayor even used the passive voice to describe police not believing victims, a subtle technique to absolve law enforcement officials of responsibility if they ignore hate crimes.

Late night comics like Stephen Colbert joked about the story.

Many prominent people of color, though, looked at the story differently. Some compared it to the Chicago Police Department’s cover-up of Laquan McDonald’s death.

Are you kidding me @RahmEmanuel??

After Chicago had to pay the family of #LaquanMcDonald $5.1 million because of your criminal cover-up of the murder of a Black teen, you have a hell of a nerve.

You have no moral high ground. Shut up and sit down.https://t.co/BuZ3QVjmCT

Angriest I’ve seen the mayor. Even more than when unarmed people are shot and killed by police in his city. Chicago paid out 370 million in excessive force lawsuits and fees in 6 years. City has to borrow $ to pay for it. https://t.co/g5xVyx2a9k

Former Representative Jesse Jackson Jr. (D-IL) posted a longer message on Facebook, discussing how prosecutors used their discretion in the Smollett case in the same way that they do when white people from the suburbs arrange plea deals.

Prosecutorial discretion.In the Matter of Jussie Smollett vs. the City of Chicago and the Democratic Machines…

Temple University professor Marc Lamont Hill discussed how people are still assuming that law enforcement is telling the truth, said that the charges against Smollett, even if he was guilty, were “absurd,” and called out how the prosecution and then the exoneration were discussed on social media.

A few thoughts on Jussie Smollett.1) I don't know what's true or what's not, but I suspect everybody involved wasn't…

Why is Google cozying up to anti-LGBTQ activists? They won’t say.