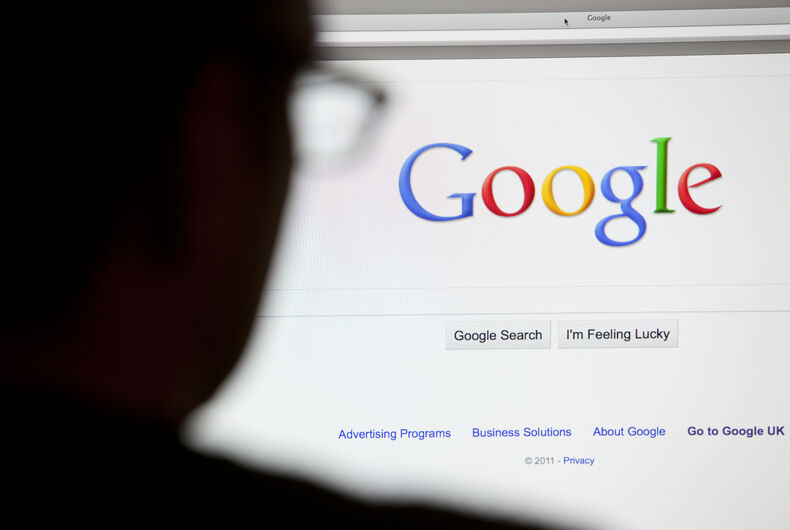 Google needs to stop digging a hole with the LGBTQ community before it’s too late. The company, whose motto was once “Don’t be Evil”, has recklessly chosen to let its reputation die on the hill of an evil “ex-gay” app., which it is now peddling at its Google Play store.

Microsoft, Apple and Amazon swiftly deleted the Living Hope Ministries app when they learned of its hateful content. Google, however, has dug in its heels and won’t budge. Even the threat of being downgraded on the Human Rights Campaign’s coveted Corporate Equality Index has surprisingly not yet influenced Google’s poor decision.

It’s difficult to know precisely why Google is standing by this toxic app. The company arrogantly refuses to address critics and is running one of the most remarkably inept public relations debacles I’ve witnessed in 30 years.

In spite of questions being asked by prominent politicians and journalists, not to mention 142,000 people who have signed a petition, the company remains mum. It is fair to ask, what exactly is this company hiding? Why are they so afraid of talking to the media, lawmakers or LGBT advocates about their decision?

It seems their amateur-hour PR strategy is to wait out the controversy, believing they can exhaust opponents into submission. Instead of weakening our resolve, however, their unwise actions have only motivated us to broaden our campaign.

In the past few weeks, nearly a dozen lawmakers across the country have condemned Google – and this list is rapidly growing. In criticizing the corporation, Orlando City Commissioner Patty Sheehan even acknowledged that an “ex-gay” conversion group harmed her.

“As an openly gay elected official, I am personally and painfully aware of the negative impact of ex gay ministries,” said Sheehan. “I joined such a group to try to ‘pray the gay away’ as a young woman.  I found the experience to be misleading, painful, and not at all helpful.  I quit, and started living my truth as a happy and out lesbian.”

“Groups like this should not be able to spread their harmful propaganda on Google or any technology applications.  They do much harm to the most vulnerable LGBTQ youth.”

Google’s position is fundamentally incoherent and illogical. They claim to support diversity and LGBT equality, yet, they stand by an app that demeans transgender people as suffering from “gender confusion” and condemns homosexuality as a “destructive lifestyle.” Perhaps the most alarming part of Google standing by this app is that it openly markets its homophobia to youth in sixth grade.

The stance by Google is, at its core, profoundly disrespectful to the LGBT community. If such an app targeted any other minority, we would not be having this conversation – the app would have been pulled in a nanosecond. “Ex-gay” programs essentially tell gay people that they are inferior and must dress up in “Straight Face,” to disguise who they are in an effort to fit into society.

It is my view that Google won’t dump the hate app because the company has recently started intense PR outreach to extreme right wing organizations.  The goal for embracing this strategy, according to The Wall Street Journal, is “to defend against the allegation that they are biased against conservatives, a complaint lodged repeatedly last year by President Donald Trump and Republican lawmakers.”

Just this week, Google named Kay Cole James to its new Advanced Technology External Advisory Council (ATEAC), to give advice on the ethics of Artificial Intelligence. James was formerly a vice president of the rabidly anti-LGBTQ Family Research Council and is now the President of the far right wing Heritage Foundation.

It is outrageous that Google appears to have slid into the realm of false equivalency where “both sides” are morally equal and where diversity now means supporting LGBTQ equality, as well as those who fervently oppose it.

Aside from political considerations, there is the question of quality control. Why would Google host an app that is pure garbage and rips off consumers? Let’s face it, nobody is becoming straight from this app. Does Google disagree?

“As the former Executive Director of Living Hope Ministries,“ Thomas wrote, “I can attest to the harm such programs cause, particularly when they target vulnerable and desperate LGBT youth, who are bombarded with messages of guilt and shame… Such messages can lead to dire outcomes. It is my hope that Google, and all online platforms, flatly reject apps that dehumanize LGBT people, offer false hope and foster discrimination.”

This story doesn’t end well for Google. If they continue allowing this cruel attack on LGBTQ youth, the final outcome will be a deeply tarnished reputation, a laundry list of condemnation from leading public officials, organizations and celebrities; the risk of a lowered score on HRC’s Corporate Equality Index, probably having their internal LGBTQ group banned from Pride marches; and potentially becoming the target of a direct action protest campaign aimed at executives during new product launches.

All this unnecessary drama to what ends? So, Google can cozy up to right wing extremists by protecting the lofty principle of allowing LGBT children to be psychologically tortured by abusive quacks?

For all the smart people who work at Google, it’s amazing that no one at this company has thought this through.

Straight, white people are outraged that charges were dropped in the Jussie Smollett case