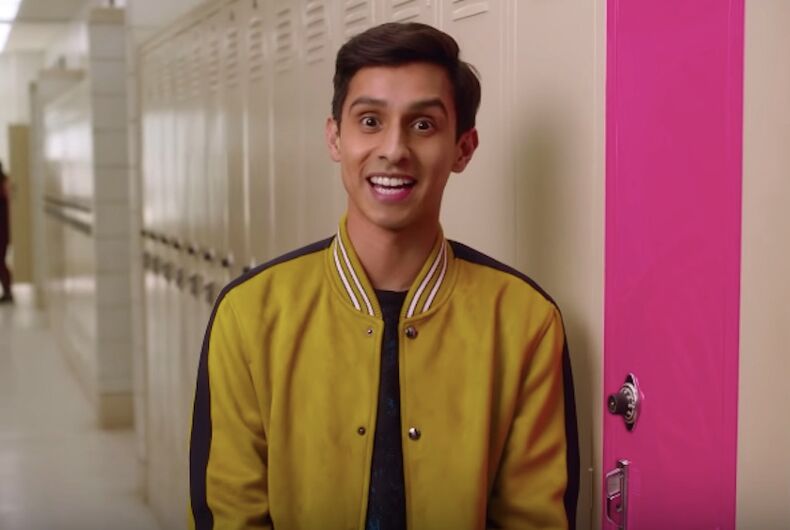 Thirteen years after its first installment, the Disney franchise High School Musical, is finally getting an out gay character: Carlos, played by gay Latinx actor Frankie A. Rodriguez. No longer will gay fans of the sequel and the third film have to scrounge for homoerotic subtext amid the franchise’s musical numbers.

Related: NBC rewrites new drama ‘Rise’ to make the star a straight man so the producer can relate

In an interview with The Advocate, Rodriguez says he watched the original High School Musical film when it premiered in 2006 because “there was really nothing like it for my generation.”

The 2006 film aired three years before Ryan Murphy’s teen musical TV series Glee and six years before the fan favorite film Pitch Perfect. So at the time, musical fans and theater kids had little media dedicated to their experience. A self-professed “big Broadway nerd,” Rodriguez has since watched the 2016 High School Musical film over 100 times.

Rodriguez says the series won’t treat his character’s sexuality as a problem with the requisite high school homophobia that viewers might expect. His character draws upon his own real-life high school theater experience and love of musicals, he says, and fans on Instagram have already sent him many messages of support after seeing him in the show’s trailer.

“I think for Disney to take a chance like this, it’s very exciting. I can’t wait for [supportive fans] to actually see the show,” he said.

The Disney Channel has also featured two same-sex couples in two of its cartoons: An August 2017 episode of the Irish animated children’s TV series Doc McStuffins and a February 2017 episode of their animated adventure series Star vs. The Forces of Evil.

In August 2018, Disney announced that it would present its first-ever out gay character in its upcoming film Jungle Cruise starring straight actor Jack Whitehall as a gay character who is “hugely effete, very camp, and very funny.” The character will reportedly never utter the words “I’m gay” despite making it “clear he has no interest in women.”