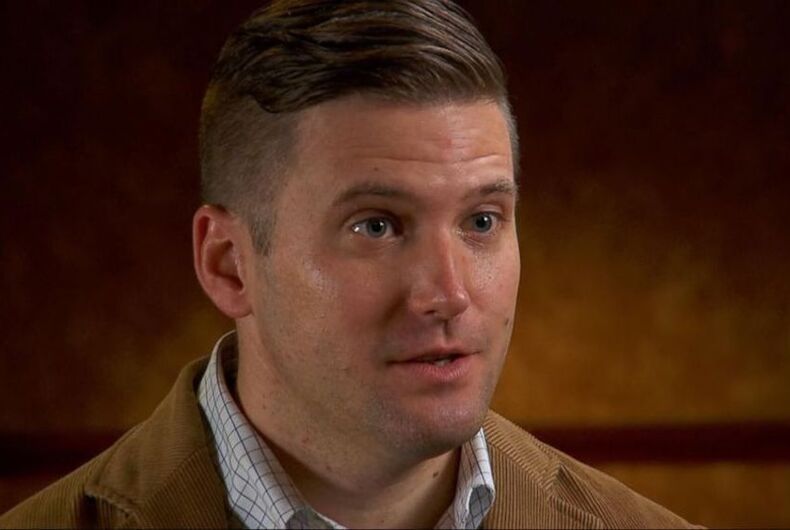 In a post published yesterday on FreeSpeech.tv, Yiannopoulos wrote that the audio was recorded at an “emergency meeting” in Charlottesville, Virginia, immediately following the August 12, 2017, the murder of 32-year-old anti-fascist protestor Heather Heyer.

Heyer, a peaceful counter-protestor to the white supremacist Unite the Right rally, was a white woman killed by a white man. Nevertheless, the leaked audio shows Spencer ranting against black and Jewish people following her death. Here’s what Spencer says:

We are coming back here like a fucking hundred times. I am so mad. I am so fucking mad at these people. They don’t do this to fucking me.

We’re going to fucking ritualistically humiliate them. I am coming back here every fucking weekend if I have to. Like, this is never over! I win! They fucking lose! That’s how the world fucking works.

Yiannopoulos once sang karaoke at an event while Spencer and other white nationalists gave a Nazi salute nearby. So why would Yiannopoulos would turn against him now?

Perhaps it’s because, as he notes in the FreeSpeech.tv post, “Richard Spencer remains active on social media, including Twitter… Meanwhile, center-right conservatives such as Gavin McInnes, Roger Stone, and Laura Loomer remain on media blacklists and banned from all major social networks and payment platforms.”

Guess who else has been banned on all major social networks and payment platforms? That’s right: Milo Yiannopoulos.

Perhaps Yiannopoulos is just jealous. After all, in September 2019, Yiannopoulos himself complained that he couldn’t “put food on the table” after losing so many gigs and platforms. Either way, it’s always nice to see the far-right turning against itself.