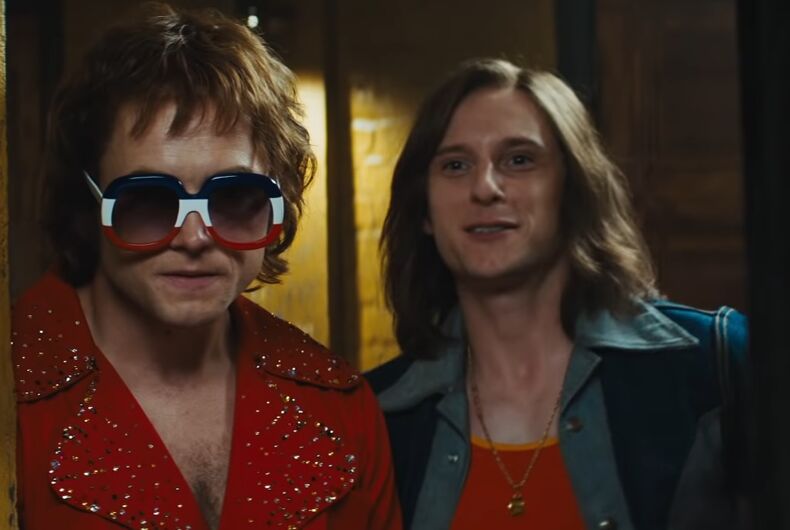 Scene from the trailer for 'Rocketman'Photo: Screenshot/YouTube

Delta Air Lines said that it’s bringing back the gay scenes that it had previous cut from the movies Booksmart and Rocketman.

Last week, passengers on the airline noticed that gay kisses and sex scenes were missing from the movies and that innocuous words like “vagina” and “lesbian” were censored.

“What message is this sending to viewers and especially to women?” Booksmart director Olivia Wilde said. “That their bodies are obscene? That their sexuality is shameful?”

Delta said in a statement on Friday that the scenes would be put back into the movies which are offered as in-flight entertainment.

“The studio has agreed to provide a special Delta edit that retains the LGBTQ+ love scenes in both Booksmart and Rocketman that will be on our flights as soon as possible,” the statement said.

Delta didn’t apologize or explain what the problem was in the first place, but Variety reported last week that Delta uses a third-party service to censor its in-flight entertainment. Delta can pick between a censored version of a movie and the full version, and it picks the censored version if there is anything in the full version of the film it doesn’t want to show on a plane.

What bothered people the most was that the gay scenes that were censored in the movies weren’t any more graphic than straight scenes that appear in movies on planes.

Booksmart is a teen comedy that had a lesbian scene that Wilde said was necessary for the story.

“There’s insane violence of bodies being smashed in half [in other movies], and yet a love scene between two women is censored from the film,” Wilde said. “It’s such an integral part of this character’s journey. I don’t understand it.”

Rocketman is a biopic about singer Elton John. Delta’s version of the film last week cut a kiss between two men but left in a violent scene where Elton John was being abused by his manager.

This isn’t the first time that Delta has come under fire for cutting gay scenes in in-flight movies. In 2016, it edited out a lesbian kiss in the movie Bad Moms while leaving the heterosexual kisses in. In 2016, the Delta version of Carol had the lesbian kisses removed.

Booksmart actress Beanie Feldstein explained why the kisses are necessary for the movie.

“The only love scene in the film is a queer love scene, and that’s so radical,” she said this past May. “By doing that, you’re asking that to be the norm. By showing queer sexuality, and making heterosexual people relate to it is actually really deeply meaningful.”