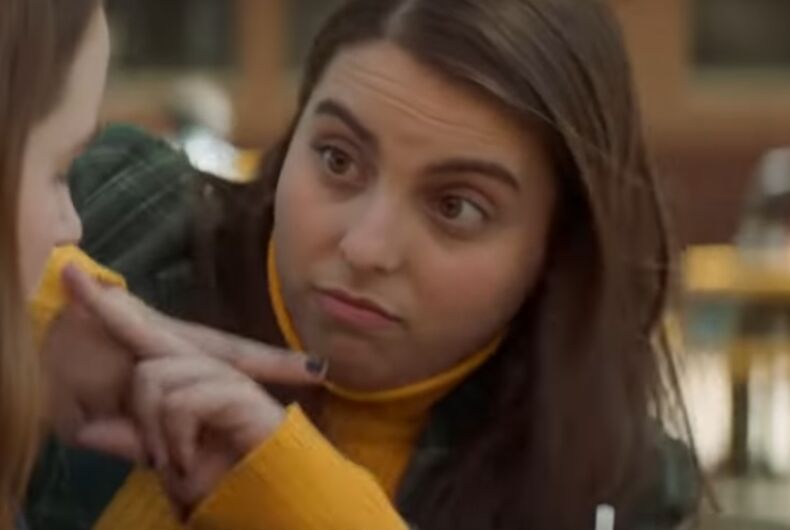 Delta Air Lines is being called out for censoring LGBTQ content from in-flight movies.

One of the films that they censored is Rocketman, a biopic about Elton John. Passengers this week noticed that a kiss between two men was cut in the in-flight entertainment.

Entertainment Weekly‘s Shana Naomi Krochmal was one of the passengers who noticed the edit. She also pointed out that a scene where John’s manager abuses him was left in.

“What does it say that the edit left in a scene of John Reid assaulting Elton but removed any evidence of intimacy between them or for that matter Elton and any man,” she tweeted.

As @yayponies pointed out in a very justified rant, what does it say that the edit left in a scene of John Reid assaulting Elton but removed any evidence of intimacy between them or for that matter Elton and any man? What is that saying is OK?

Delta also cut several elements from the teen comedy Booksmart, including a lesbian sex scene that director Olivia Wilde said was integral to the plot. The airline also censored words like “vagina” and “lesbian” while leaving in other expletives, like “fuck.”

— Most disappointingly, they cut most of Amy and Hope’s love scene in the bathroom, which involves zero nudity, but does involve an essential plot point for a lead character. Wtfffff.

“There’s insane violence of bodies being smashed in half [in other movies], and yet a love scene between two women is censored from the film,” Wilde said. “It’s such an integral part of this character’s journey. I don’t understand it.”

Booksmart actress Beanie Feldstein was asked about the censorship this past Sunday on the red carpet for the Academy of Motion Picture Arts and Sciences’ Governors Awards.

“We’re on the case to get this rectified. Our movie is a beautiful representation of the queer experience as young people,” she said. “I’m a queer person. So we’re getting to the bottom of it, don’t worry. If you can watch me and Skyler [Gisondo] kiss, you can watch Diana [Silvers] and Kaitlyn kiss.”

This isn’t the first time Delta has come under fire for censoring LGBTQ content. In 2016, Delta was criticized for editing out lesbian kisses from the in-flight version of the movie Carol.

In 2017, the airline was caught cutting a lesbian kiss from the movie Bad Moms, while they didn’t touch heterosexual kisses.

Delta said in a statement that its “content parameters do not in any way ask for the removal of homosexual content from the film.”

Variety reports that the airline uses a third-party service for in-flight entertainment. The company provides both the unedited and an edited version of a film, and Delta goes with the edited version if there is anything in the unedited version that violates its content standards, even if other things are cut that Delta doesn’t care about.

That said, Delta is probably a major client for the third-party service and could request that the service either change its standards or create a third, semi-edited version of films that meet its standards.

Because censoring queer scenes from movies while leaving in equivalent heterosexual scenes implies that there is something dirty and shameful about same-sex love.

“The only love scene in the film is a queer love scene, and that’s so radical,” Feldstein said this past May about Booksmart. “By doing that, you’re asking that to be the norm. By showing queer sexuality, and making heterosexual people relate to it is actually really deeply meaningful.”

A pride crosswalk was defaced with Christian graffiti