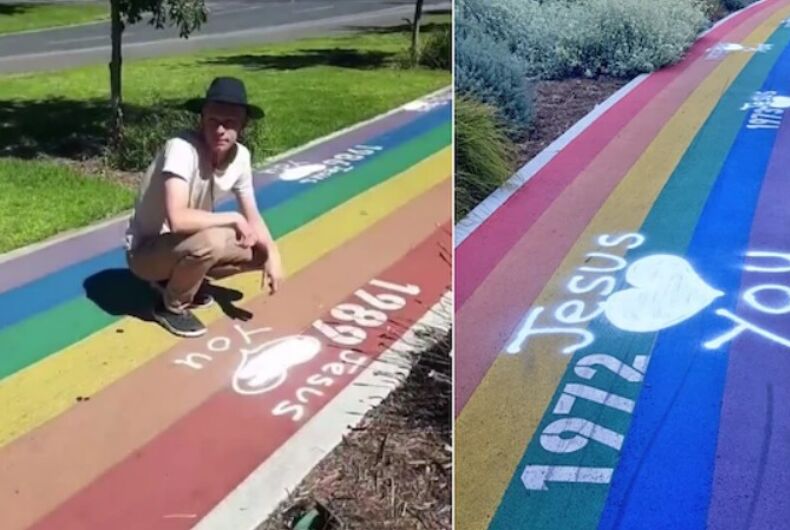 A rainbow pride installation has been vandalized with Christian graffiti.

The Pride Walk in Adelaide, Australia, is a rainbow that features key dates in the LGBTQ movement. It was installed in 2016, but last week a man spray-painted “Jesus [heart] you” multiple times over the dates.

“My boyfriend and I saw as we drove past. [A man] was writing ‘Jesus Loves You’ on the top of all the printed landmark dates along the walk,” Tom, a man who didn’t want his last name published, told ABC News.

“We pulled around and I got out, snatched his spray can and bag of several more, took some photos of him — he calmly let me and then walked off — and I threw it in our car,” he said.

“He didn’t say a single thing to me the whole time. About 10 seconds later, some police drove past, I waved them down, and pointed him out to them.”

South Australia police said that a 28-year-old man has been arrested in connection to the vandalism.

“This vandalism is a sad reminder that despite all we’ve achieved on the road to equality, there is still work to be done to keep fighting homophobia in our city,” said Adelaide City Councillor Robert Simms.

In a statement, the Adelaide City Council said that they were “disappointed” with the graffiti and that it will be removed soon.

As rainbow crosswalks and other installations for LGBTQ Pride become more common around the world, they have also become a place for hateful people to express anti-LGBTQ sentiment through vandalism.