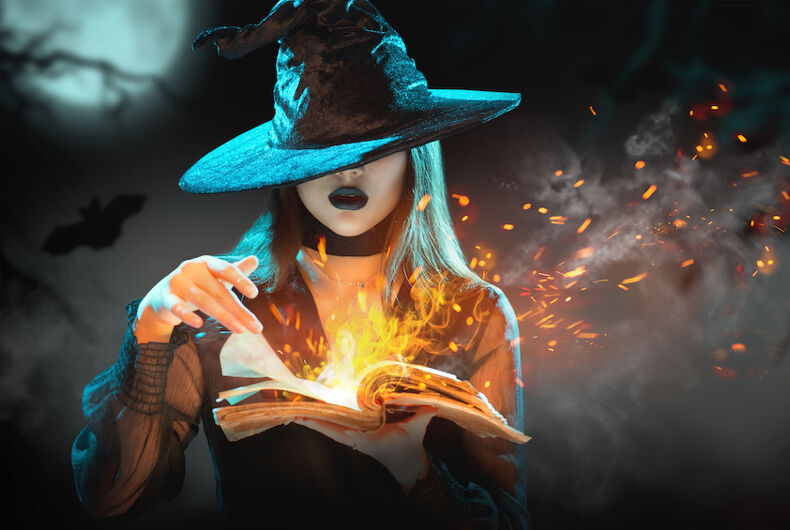 Donald Trump’s supporters are commemorating Halloween in a magical way: by claiming that Democrats are targeting him with witchcraft.

Anti-LGBTQ activist Michael Brown says “the spirit of Jezebel” is executing a “Satanic plot” to destroy America and Trump using feminism, LGBTQ rights, abortion, witchcraft and sex trafficking of kids — and that’s just the tip of the black-magical iceberg.

On his web show The MC Files, right-wing conspiracy theorist Chris McDonald said, “[Democratic] Rep. Adam Schiff is a pedophile and a Satanist who practices human sacrifice.” How does he know this? Because he “senses such a dark, demonic power on Schiff whenever he hears his speak.”

The group Intercessors for America recently urged its followers to pray for Trump to protect him from “occultic activity.” Just how deep is this witchy plot against the president, you ask? Let them explain:

“Spells and hexes. Curses and binding. Witches, warlocks, occultists, and resisters of President Trump are focusing their negative energy and spiritual power toward President Trump right now. Monthly rituals have been taking place since the beginning of his presidency. Now, all who call on the name of the enemy are actively ramping up their efforts and coordination in this heightened time of occult activity for a week of binding beginning the evening of October 25.

Meanwhile, Florida megachurch pastor Paula White recently prayed for Trump’s protection against “the wicked” in article entitled “Why Every Christian Must Make Spiritual Warfare This Halloween”:

Perhaps these whack jobs have a point though. After all, just one year after Trump’s election we heard that witches are forming covens across America and casting spells for LGBTQ rights. That same year self-proclaimed witch and chanteuse Lana Del Rey and other witches participated in a mass “binding spell” on the president.

No matter all the magic, it seems that Trump’s own incompetence has had the most powerful binding effect on him. No wonder he feels like he’s the target of a never-ending “witch hunt.”

A pride crosswalk was defaced with Christian graffiti