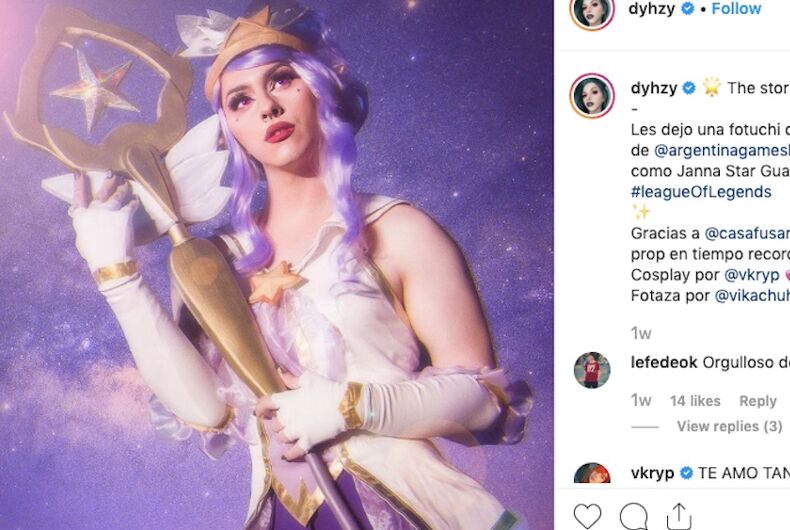 Alberto Fernàndez, the newly chosen president-elect of Argentina, has a 24-year-old sexually-fluid son named Estanislao who moonlights as a well-known drag queen and cosplayer with the name DYHZY.

DYHZY has over 182,000 Instagram followers and 123,900 Twitter followers and has become an unlikely messenger of peace and queer-acceptance in South America, especially after recent criticism from the son of Brazil’s anti-LGBTQ president.

Estanislao wasn’t always thrilled about his dad running for president. In fact, he reportedly deleted his Instagram account for a short while after his father announced his candidacy.

In a June 2019 interview, Estanislao said, “Now it’s happening to me that they know me in places. The other day I got to work and a guy told me, ‘You are the son of my hope.’ And there I thought ‘How cool!’ I wouldn’t be here if it wasn’t for my father, but it also doesn’t take away the possibility of growing on my own merits.”

To his father’s credit Alberto said of his son, “I have pride in my son, how can I not be proud? My son is a rights activist in that community. I would worry if my son was a criminal, but he is a great man.”

The son of Brazil’s homophobic president attacked Estanislao online, and Estanislao turned it into a message of peace and unity

“Brazilian brothers, we are in this fight together. I love you. Many people from Brazil started following me and I want to tell the LGBTTTIQQA + community and allies of Brazil that we are together in this fight. Remember that love always conquers hate and among us we have to always take care of ourselves.”

Here are some images of Estanislao’s drag queen cosplay, first as Joker.

Star Guardian Janna from the game Universe of League of Legends

WeAreMitu.com says Estanislao’s “sexuality is fluid and has been in a relationship with his girlfriend, Natalia Edith Leone, for three years.”