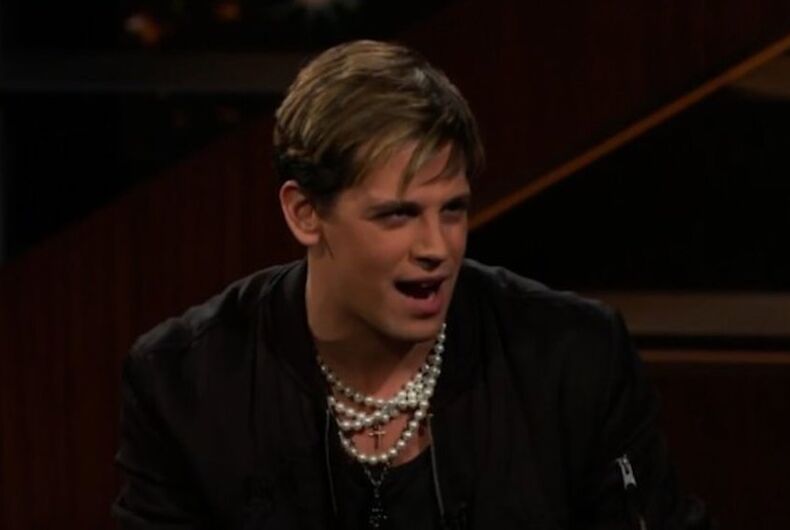 Gay, right-wing provocateur Milo Yiannopoulos has pretty much been banned by every mainstream American social media platform and disowned by U.S. conservatives for his racist, transphobic and pro-child rape comments. And apparently he’s so toxic that Germany’s far-right party doesn’t want anything to do with him either.

Alternative for Germany (AfD) — a far-right political party that opposes same-sex marriage, integrating Muslims into German society and the existence of climate change — recently disinvited Yiannopoulos from speaking to them at a parliamentary session on blogging.

AFD wants to “strengthen marriage and the family” [heterosexual]; “Children need both parents”, and society needs to “strengthen fathers.” One part reads, “For a clear family image: the ideology of gender is unconstitutional,” a line which opposes recent gender equality efforts for women in German. AFD is also calling for an end to sex education courses and, of course, wants to put an end to “gender studies” in general.

Yiannopoulos seemed like a good fit for the group as he fancies himself an iconoclast against mainstream gay orthodoxy, but apparently even right-wing Islamophobes have their limits.

The withdrawn invitation is just the latest in Yiannopoulos’ public free-fall from (dis)grace.

In July 2016, Yiannopoulos was permanently banned by Twitter after making repeated transphobic and racist posts referring to comedian Leslie Jones as “a black dude.” The following year, the publisher Simon and Schuster cancelled Yiannopoulos’ poorly written book, Dangerous. When Yiannopoulos pledged to sue the publisher for $10 million, his lawyers dropped him.

Around the same time, Yiannopoulos’ comments supporting child rape by Catholic priests resurfaced online, compelling the conservative CPAC conference and right-wing hate site Breitbart.com to both drop him from their rosters.

In April 2018, Yiannopoulos and a friend got ejected from a Manhattan bar by a group of Democratic Socialists shouting, “Nazi scum get out.” In December 2018, leaked Australian court documents showed that Yiannopoulos is nearly $2 million in debt to the Hawaii hotel where he married and the aforementioned legal team that dropped him.

Related: Here are 7 jobs Milo Yiannopoulos could get now that he’s broke

By that time, Yiannopoulos had resorted to selling useless nutritional supplements on the right-wing conspiracy theory show Info Wars. When Yiannopoulos set up a campaign on Patreon.com to help raise money, the platform banned him. Then, after repeatedly failing to organize a speaking tour through Australia, the country banned him.

Last month, conservative organizers in Oklahoma left him in even more debt when they unexpectedly cancelled his speaking appointments in the state. Then, most recently, Facebook and Instagram banned him, denying him some of his last major mainstream platforms.