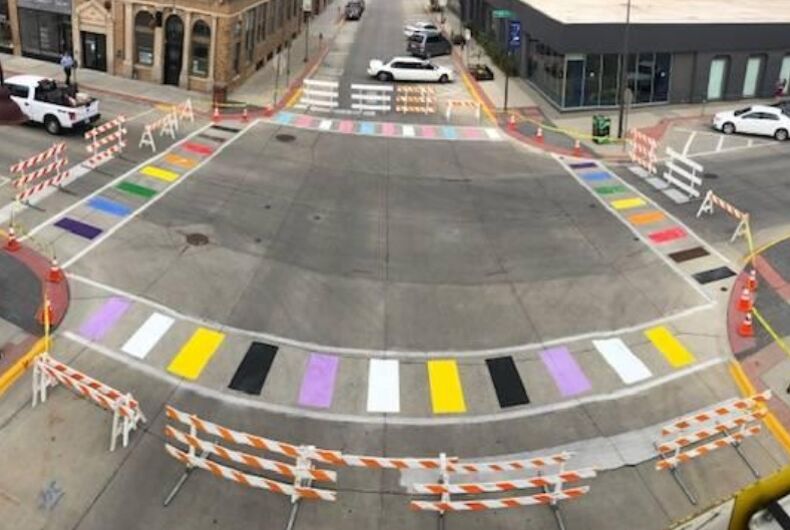 The crosswalks of Ames, IowaPhoto: contributed

The Trump administration told a town to remove its rainbow crosswalks, but the city council has refused to comply.

Last month, the city received a letter from the Federal Highway Administration (FHWA) telling them that their colorful crosswalks are in violation of federal rules.

The letter claims that the crosswalks are unsafe since they’re “distracting” for car drivers and encourage cyclists and pedestrians to loiter in the street.

“Crosswalk art has a potential to compromise pedestrian and motorist safety by interfering with, detracting from, or obscuring official traffic control devices,” the letter stated. “The art can also encourage road users, especially bicycles and pedestrians, to directly participate in the design, loiter in the street, or give reason to not vacate the street in an expedient or predictable manner.”

The letter also said that the crosswalks are confusing for drivers and open the city up to liability.

“It also creates confusion for motorists, pedestrians, and other jurisdictions who may see these markings and install similar crosswalk treatments in their cities. Allowing a non-compliant pavement marking to remain in place presents a liability concern for the City of Ames in the event of a pedestrian/vehicle or vehicle/vehicle collision.”

The FHWA is headed by Nicole Nason, who was first appointed to lower level positions in the FHWA by George W. Bush, where she was accused by Environmental Protection Agency staff of impeding their efforts to lower greenhouse gas emissions. She spent the Obama administration out of the executive branch but was appointed director of FHWA earlier this year by Donald Trump.

And now her agency is going after that scourge of street safety: rainbow crosswalks.

The only problem is that the federal government doesn’t have jurisdiction over the streets in Ames.

The FHWA “couldn’t explain to me how they had jurisdiction over city streets, they were unaware of any penalties, and said they were still researching that,” said Ames City Attorney Mark Lambert said at a city council meeting last week.

“Frankly, I think that according to the manual itself, there’s a good argument we’re not violating the manual, since there’s no prohibition on colors.”

A resident at the meeting also pointed out that the crosswalks are in compliance – they have two lines that are white, which he said was enough to comply with the federal definition of a crosswalk.

“My only question is, do we need to do anything?” Ames City Council member Chris Nelson asked Lambert. “Can we just accept the letter and say thank you?”

And that’s just what they decided to do – ignore the FHWA letter.

Rainbow crosswalks have been painted, often for Pride celebrations, in cities all over the world ever since they debuted in West Hollywood in 2012 at the intersection of San Vicente and Santa Monica Boulevards.