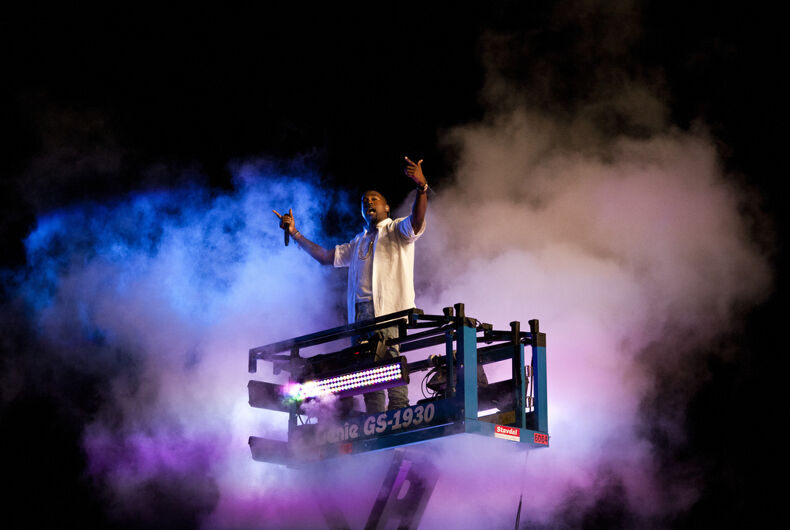 Kanye West performs at the Way Out West festival on August 13, 2011 in Gothenburg, Sweden.Photo: Shutterstock

Kanye West has announced that he will not record secular music any longer but will focus on gospel instead. The outlandish rap artist has also pushed back a release date for his upcoming album, Jesus Is King, again.

West, who has repeatedly made headlines for his support of President Donald Trump, played the album for fans and media at two events, and it quickly leaked that one of the tracks – “Closed on Sundays”  – includes lyrics praising the fast food chain Chick-fil-A.

Related: This governor surrounded himself with Chick-fil-A when he signed an anti-LGBTQ bill

The lyrics to the song include a repetitive reference to the notoriously anti-gay company, using the chain as a positive role model for Christians. While queer people and allies have been boycotting the restaurants, conservatives and evangelical Christians have rallied around it, igniting a feud around LGBT civil rights and marriage equality.

The chorus for the song is:

West’s wife, Kim Kardashian, teased fans last week when the album didn’t materialize on its first expected release. On the day it was anticipated, she posted a photo of the album’s track list and told fans to “have faith.” She later said on Instagram that it would be released last Sunday.

The singer supposedly has a documentary by the same name coming out on October 25 and it’s rumored that the album finally drop on the 24th – a Sunday.

While West’s star has been blemished lately, he still has legions of fans. Some of them, however, aren’t buying the vulgar rapper’s repentance.

“The way he talks about women in his other/recent albums, I’m skeptical he knows the gospel,” a divinity school graduate wrote on Twitter. “I am much more willing to believe [out performer] Chance [The Rapper] is born again than Kanye.”

Still, she added that, “I’m gonna give it a try and make a decision on how I feel about it then.”

The way he talks about women in his other/recent albums, I’m skeptical he knows the gospel. I am much more willing to believe Chance is born again than Kanye.

But I’m gonna give it a try and make a decision on how I feel about it then.

The Trump administration told a town to remove its rainbow crosswalks. The town said no.