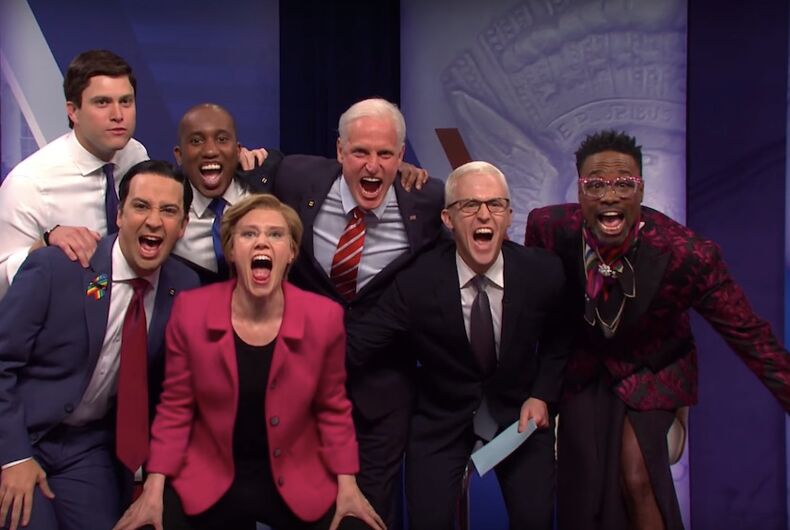 In the skit, Anderson Cooper (played by SNL cast member Alex Moffat) said the purpose of the town hall was to address “issues affecting our community, LGBTQ … and straight girls who make Pride about them.”

Deciding to go “all out” because they’ll “never do this again,” Cooper brings out Billy Porter to introduce the candidates. The real-life actor shows up in glittery glasses, an ascot and a stylish floral print blazer to announce, “The category is Vanderbilt Dynasty News realness, hinny,” to which Cooper replies in monotone fashion, “Yes, gawd.”

Soon after, Porter announces the first candidate in the town hall — “Mayor Pete … representing The House of Booty Gig,” a play on Buttigieg’s last name and the idea of competitors representing “houses” in ballroom culture.

When asked to respond to critics who say he’s not “gay in the right way,” Buttigieg (played by Colin Jost) responds, “There’s no wrong way to be gay, unless you’re Ellen this week.” — a poke at the criticisms lesbian talk show host Ellen DeGeneres’ has faced for her friendship with anti-gay former President George W. Bush.

Next up is Elizabeth Warren, played by Kate McKinnon. When she hits the stage, Warren opens by saying, “Y’all know I’m not a lesbian, but all the ingredients are there.” She uses her time to deliver a few quick zingers at homophobic and transphobic people:

“If someone doesn’t want to serve gay people at their small business, I bet that’s not the only thing that’s small. And when people say gay and trans people shouldn’t be involved in civil rights act protections, well I wish their parents had used protection.”

Warren then pulled off her blonde wig to reveal rose petals falling on her head, a reference to the drag queen Sasha Velour’s memorable performance during the season nine finale of RuPaul’s Drag Race.

Then comes Julian Castro (played by Lin-Manuel Miranda), who begins by saying, “As a Democrat, I want to apologize for not being gay, but I promise to do better in the future.”

Closing out is Joe Biden, played by Woody Harrelson. In mocking the real-life candidate’s propensity for verbal gaffes, he declares, “The vast majority of people in America are not homophobic — they’re just scared of gay people.” Then, he completely murders the LGBTQ acronym by stating, “Whether you’re gay, lesbi, transgenital or queen, you’re okay with Joe.”

When an audience member (played by gay cast member Bowen Yang) steps to the mic, Biden exclaims, “Oh look at you! If I told you you had a nice body, would you hold it against me?” Irritated, Yang answers, “Sure,” and asks Biden how he’d explain his past support of the anti-gay military ban known as “Don’t Ask, Don’t Tell.”

Biden responds, “I’m glad you asked that question and let me answer by telling you a false memory.” He then goes on to tell a long story about his childhood in Delaware circa “Nineteen clickity-clack” when he saw “two, very well-dressed men” kiss.

Midway through the story, Biden asks the audience, “Who’s nervous about this story? Show of hands?” to which everyone in the room raises their hands, leading Cooper to say, “We’re all nervous, Joe.”

To close out, after his story, Biden turns to Cooper and asks, “In closing, ever been kissed by a VP before?” He then smooches Anderson, and the entire crew comes out to end the segment and continue the rest of the show.

This ABC News journalist’s Coming Out Day letter gives advice to his younger, closeted self