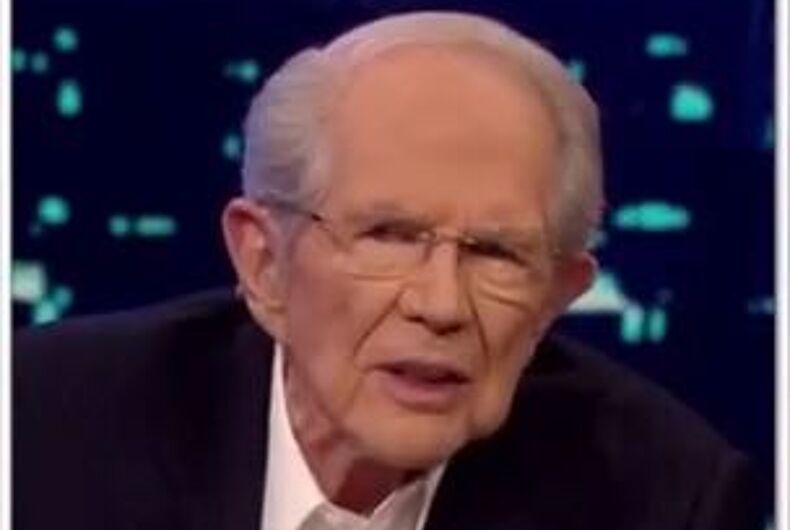 Count The 700 Club host Pat Robertson as one of the few conservative Christian leaders of late to break away and criticize one of Donald Trump’s decision.

The television evangelical has promoted anti-gay beliefs for decades and, along with Jerry Falwell, blamed LGBTQ people for the Sept. 11 terrorist attacks. He was one of Trump’s few ardent non-Fox News supporters on TV, but in the latest episode of his long-running Christian talk show, Robertson expressed serious dissatisfaction with the Trump administration’s decision to remove military forces from Syria.

Related: Pat Robertson says there will be ‘atomic war’ if Christians can’t discriminate against LGBTQ people

“I am absolutely appalled that the United States is going to betray those democratic forces in Northern Syria, that we possibly going to allow the Turkish to come in against the Kurds,” Robertson said.

Next, Robertson rambles on about Turkish leader Tayyip Erdogan, calling him both a dictator and thug. “He’s a strong leader, and… do you say he’s an ally of America? He’s nonsense. He is in for himself.”

Robertson then returns to a previous criticism he made against Trump, reminding viewers of the White House’s inaction regarding the murder of journalist Jamal Khashoggi, who was murdered in Oct. 2018 while visiting a Saudi Arabian consulate in Turkey. He then alludes to this decision as having similar repercussions as the Armenian Genocide of 1915.

“The President, who allowed Khashoggi to be cut into pieces without any repercussions whatsoever, is now allowing the Christians and the Kurds to be massacred by the Turks.”

The former 1988 Republican Presidential Candidate is one of several conservatives — Lindsey Graham and Mitch McConnell among them — who has openly disagreed with Trump, many of whom cheered and supported since him through several other controversial and questionable decisions. Jerry Falwell Jr., the son of Robertson’s former contemporary, has been one of the few Trump supporters to stand by the Administration’s decision.

“The president of the United States is in danger of losing the mandate of heaven,” Robertson says toward the close of the one-minute clip.

Pat Robertson is "appalled" by Trump's decision to withdraw U.S. troops from northern Syria: "The President of the United States is in great danger of losing the mandate of Heaven if he permits this to happen." pic.twitter.com/YGeNYpbGrF

Trump hasn’t replied directly to Robertson, but he continued to defend his decision throughout the week via Twitter. “We may be in the process of leaving Syria,” he tweeted, “but in no way have we Abandoned the Kurds, who are special people and wonderful fighters.”

Trump continues on to say this decision actually helps the Kurds in Northern Syria “financially” in regard to weapons, and that there were only 50 American soldiers based in the area anyway. He continued to claim that Turkey will devastate their economy through the negative international implications of taking any military action and through America’s influence of the economy. Turkey has sought to take advantage of the unrest and volatile security in Syria due to the heavy presence of the ISIS’s terrorist militia presence in the country.