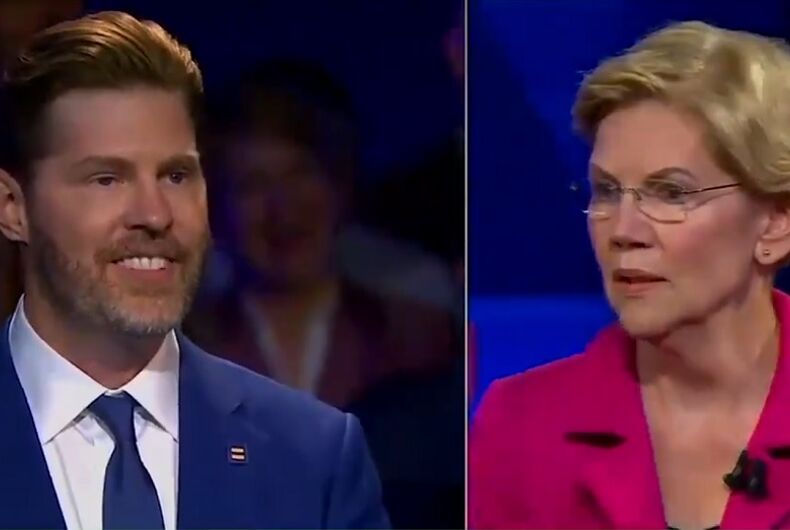 Here are some of the stand-out moments.

Related: Bernie Sanders is the only Democratic frontrunner who will skip both LGBTQ debates

Senator Elizabeth Warren (D-MA) was asked what she would tell a supporter who said they are “traditional” and believe that marriage is between one man and one woman.

“Well, I’m going to assume it’s a guy who said that and I’m going to say, ‘Then just marry one woman. I’m cool with that.’”

The audience cheered, but then she delivered a zinger: “Assuming you can find one.”

How would I respond to someone who says marriage is between one man and one woman? #EqualityTownHall pic.twitter.com/8uNXqXI5n7

She then went on to explain how she learned in church to be accepting of diversity and how she doesn’t believe that religion can be a reason to be hateful.

2. Trans Lives Matter protested while Mayor Pete Buttigieg was being asked a question

Cooper asked the audience to applaud the protestors: “Let me just point out there is a long and proud history in the gay, lesbian and transgender community of protest, and we applaud them for their protest. They’re absolutely right to be angry and upset by the lack of attention, particularly in the media, on the lives of transgender people.”

Someone off-stage who couldn’t really be heard sounded like she was scolding Cooper for not enforcing the rules of the forum.

Before Buttigieg answered his first question, he took a moment to recognize the protestors.

“Thank you for your question, and before I turn to it, I do want to acknowledge what these demonstrators were speaking about, which is the epidemic of violence against black trans women in this country right now,” he said. “And I believe, or would like to believe, that everybody here is committed to ending that epidemic.”

3. Joe Biden said something about “gay, gay bathhouses” that has already been remixed

Former Vice President Joe Biden was asked a question about health disparities, particularly when it comes to HIV, and he responded with something about “gay, gay bathhouses” and “round-the-clock sex.”

Someone has already remixed Biden’s response.

(i got real stoned and made the remix) pic.twitter.com/4reebFaIpH

Biden also stumbled on the expression “coming out,” but it was cute.

Buttigieg was asked about how people often use their faith as an excuse for discriminating.

“The right to religious freedom ends where religion is being used as an excuse to harm other people,” he said.

He also answered the question from a theological perspective: “It makes God smaller,” he said, to use religion as an excuse to discriminate.

The Christian tradition that I belong to instructs me to identify with the marginalized. It tells me that the greatest thing any of us has to offer is love. Using my religion—any religion—as an excuse to harm others is an insult to faith. #EqualityTownHall pic.twitter.com/rhZt3n7F59

5. Chris Cuomo made an offensive joke about pronouns

When Senator Kamala Harris walked on stage, she waved to the cheering crowd.

Before CNN host Chris Cuomo could ask a question, Harris said, “My pronouns are she, her, and hers.”

Cuomo could have just moved on to the first question, but he decided to make a funny. “Mine, too,” he responded.

KAMALA HARRIS: My pronouns are she, her and hers.

CHRIS CUOMO: Mine, too.

Cuomo apologized shortly after leaving the stage after Twitter erupted in outrage.

PLEASE READ: When Sen. Harris said her pronouns were she her and her's, I said mine too. I should not have. I apologize. I am an ally of the LGBTQ community, and I am sorry because I am committed to helping us achieve equality. Thank you for watching our townhall.

CNN host Don Lemon was taking a question from the mother of a transgender child during former Representative Beto O’Rourke’s (D-TX) time when a woman in the audience took the mic from her.

A black trans woman has taken over the mic, noting the absence of black trans people at the #EqualityTownHall tonight. My guess she is responding to the conspicuous removal of @AshleeMPreston: https://t.co/OD1FvG3q0i pic.twitter.com/rxf41bzP40

A new study finds conversion therapy is really bad for trans people. Who could have guessed?