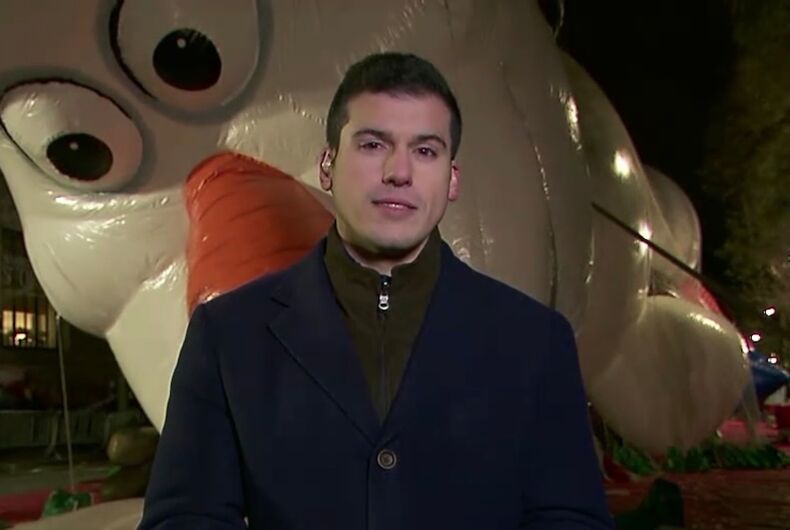 Emmy Award-winning broadcast journalist Gio Benitez celebrated National Coming Out Day by penning an open letter to his past self. The letter was published yesterday by his employer, ABC News.

Throughout the letter, Benitez tries to comfort his younger, 12-year-old self and convince him that he’ll be okay, despite being confused by discovering his sexuality and the feelings he had.

Related: How Gio Benitez and others helped pave the way for LGBTQ people on TV

“You’re only 12, but your mind is already asking questions no 12-year-old could possibly answer. Questions that will take years to explore, embrace and understand,” Benitez writes. “Questions that may flip your whole world upside-down.”

Benitez is a prominent ABC News journalist who regularly appears on their top news programs Good Morning America, 20/20, and Nightline, among others. Since 2013, he has covered the Pulse Massacre, Boston Marathon bombing, search for escaped prisoners in New York State, and snow storms of 2013 and 2014. He was born and raised in Miami, where his television career started at the local CBS station WFOR. There, he shot the first ever television report recorded on the iPhone and covered the Haiti earthquake crisis and Trayvon Martin case.

Benitez’s letter goes on to describe bullying and homophobia he encountered within his community and at school. “Your community sometimes uses tough language. A beautiful Spanish accent doesn’t mask ugly words….You’re scared, and just doing the best you can.”

The older Benitez also describes how he’ll internalize that homophobia and then try to hide it after becoming an adult and studying at Florida International University.

“You’ll spend years trying to be more ‘manly.’ You’ll work out for hours each day, you’ll style your hair differently, you’ll get braces to fix those teeth, and you’ll date brilliant, beautiful girls.”

“Hiding the truth won’t stop you professionally either,” Benitez continues. “A once-in-a-lifetime scholarship at a TV station in Miami helps you become a TV producer and then a local news reporter. But the truth about who you are is still itching to get out.”

Benitez goes on to describe the acceptance he received from coming out to his mom at 24, and getting called to work at ABC News despite being told ‘you can’t be gay and successful in the media’ by a friend.

“In fact, when you get engaged and ultimately marry your husband, your colleagues will show your photos and congratulate you on America’s No. 1 morning show, Good Morning America,” Benitez writes. This is followed by an Instagram post of Benitez proposing to his now husband, Tommy DiDario, in 2015, alongside more pictures of the journalist working at ABC News alongside Diane Sawyer and meeting Billy Porter and Jesse Tyler Ferguson.

“Don’t rush it, kid,” Benitez concludes. “You don’t need to reveal your secret just yet, if you don’t want to. You’re only 12. Just know that you’re special, and someday you’ll feel that too, and everything will be OK.”

Benitez finishes the letter by saying, “When you’re ready, start living your truth. That’s when the magic happens.”