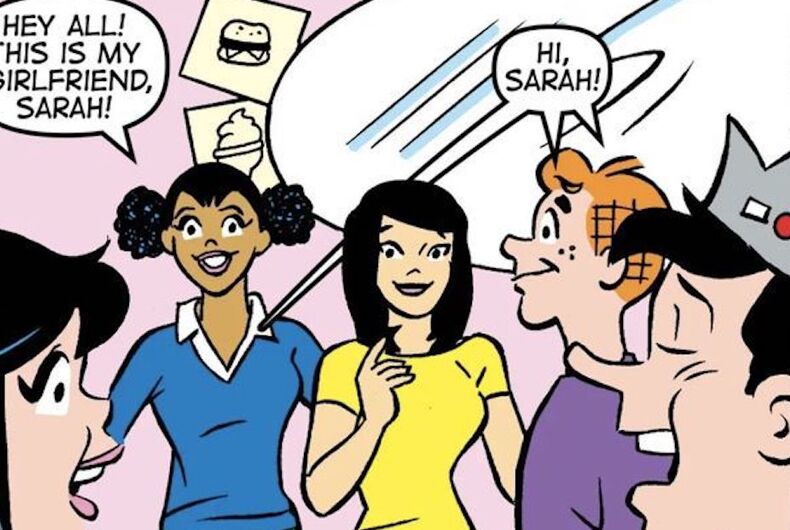 For National Coming Out Day, Archie Comics teamed up with the It Gets Better Project to create a few strips under the hashtag #ABetterUniverse to imagine a world where “everyone is met with love and support when they choose to disclose their sexual orientation and/or gender identity.”

The short two- and three-panel strips feature Archie, Veronica, Betty, Jughead and their friend Kevin Keller having a friendly reaction as classmates come out to each of them.

The It Gets Better project writes:

“The comic series, #ABetterUniverse, demonstrates 5 different ‘coming out’ scenarios in Riverdale where young people are doing the right thing by fostering a supportive and nurturing environment for LGBTQ+ youth. We hope this series inspires people to create the world or universe they want to live in.”

Here are the five #ABetterUniverse comic strips from Archies Comics’ collaboration with the It Gets Better project:

What’s cool is that in each of the strips the Archies gang treats their queer classmates with warmth, respect and support. While Keller thanks his trans and gender-neutral friends for trusting him with their truth, in the other strips, Betty and Veronica merely treat their newly out pals warmly but aren’t too terribly shocked — just the way it should be.

How Archie Comics introduced its young readers to LGBTQ issues

After One Million Moms, a project of The American Family Association, asked Toys R Us not to display comics featuring Keller near its checkout aisles. Toys R Us refused and Archie Comics responded by creating a storyline in which a mom in Riverdale objects to Keller kissing his boyfriend in public.

In a 2014 Life with Archie comic, Archie actually dies while taking a bullet for Keller during an assassination attempt on Keller’s life. Then, in 2016, the comic revealed that the ever-hungry, joke-cracking character of Jughead was actually asexual.

This ABC News journalist’s Coming Out Day letter gives advice to his younger, closeted self