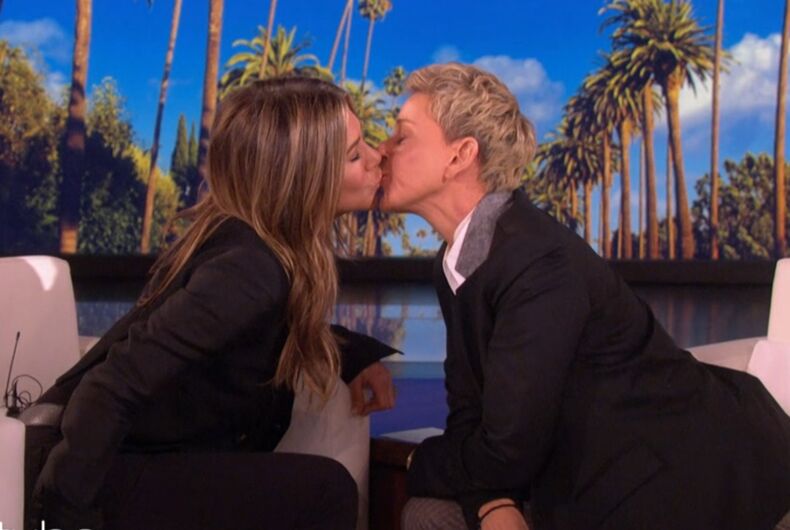 The Friends actress was on Ellen’s show today and she asked Ellen about her kiss with radio shock jock Howard Stern.

“I would like to know how the kiss happened,” Aniston said. Several weeks ago, Stern suggested he and Ellen kiss so that people would stop talking about her friendship with former President George W. Bush.

Ellen starts to explain the story, but Aniston interrupted her.

“Will you tell me about it?” she said, suddenly serious. “Tell me, how was it? Did you enjoy it? Were you nervous? Did you kind of get into it at all?”

“Is this something that’s going to turn you on?” Ellen quipped.

Aniston asked when was the last time Ellen kissed a guy, and Ellen asked why everyone is so caught up on that. She said she doesn’t make out with guys regularly, but it’s not a problem for her in general.

“When was the last time you kissed a girl on the lips?” Ellen shot back.

While Aniston tried to remember, Ellen got into position for a smooch, definitely more excited than when Stern was on her show. Aniston knew what was happening, fixed her hair, and leaned into it.

“You have such soft lips,” Aniston said.

It hasn’t been that long since a gay kiss on television required a very special episode, like when the popular 90s shows LA Law, Roseanne, and Star Trek: Deep Space Nine featured two women kissing. Now it’s just something that a mainstream actress like Jennifer Aniston will do when she goes on The Ellen Degeneres Show.