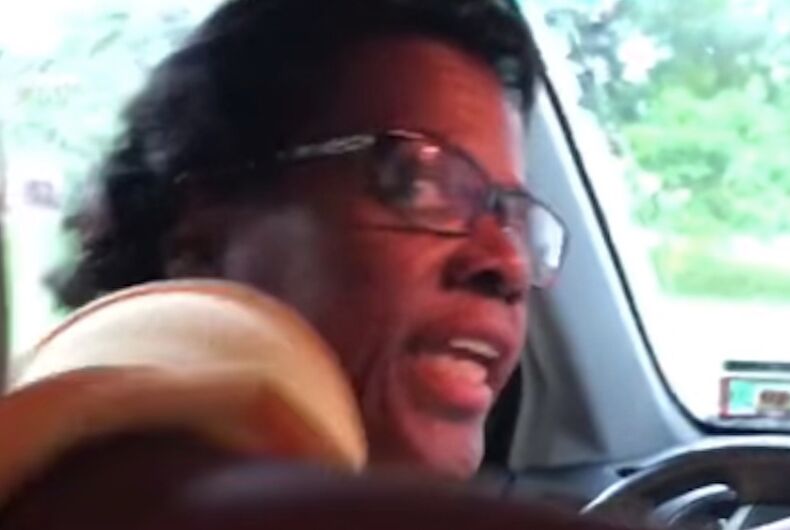 A New Jersey woman named Kristin Michele claims that she and her girlfriend Jenn Mangan were kicked out of an Uber car by a driver named Cynthia because the couple shared a kiss on the cheek while being driven to a concert.

Related: An Uber driver dragged a man down the street when he found out he was gay

In the video Michele posted of her encounter with Cynthia, Michele asks, “Are you kicking me out because I’m gay?” The driver responds, “Yes, I am.”

Michele begins swearing and calls the driver an “*sshole” as the driver repeatedly tells her to “get out” and tries to push her out of the car while swatting away Michele’s phone from recording.

“I can reject any ride I want to,” the driver says. “I’m calling the police.”

Here’s a censored version of Michele’s video with the swear words silenced:

NJ.com reports, “The women reached out to Uber and heard back from the company, which said they would handle the incident, but didn’t specify what would happen, according to Mangan.”

Uber has since issued the following statement: “Uber does not tolerate discrimination in any form and we have been in contact with this rider. We removed the driver’s access to the app as soon as we were made aware of this incident.”

While Uber’s policy prohibits drivers from discriminating on the basis of sexual orientation and other characteristics, the company has an ongoing issue of its drivers mistreating LGBTQ passengers.

In June 2016, an Australian Uber driver launched into homophobic tirade before threatening to drag two lesbian customers out of his car. In June 2018, a lesbian couple in New York was booted from a car for allegedly sharing a “quick peck.” The following month, a Washington D.C. man was kicked out for “sounding gay.”

Sodomy laws are still being used to harass LGBTQ people