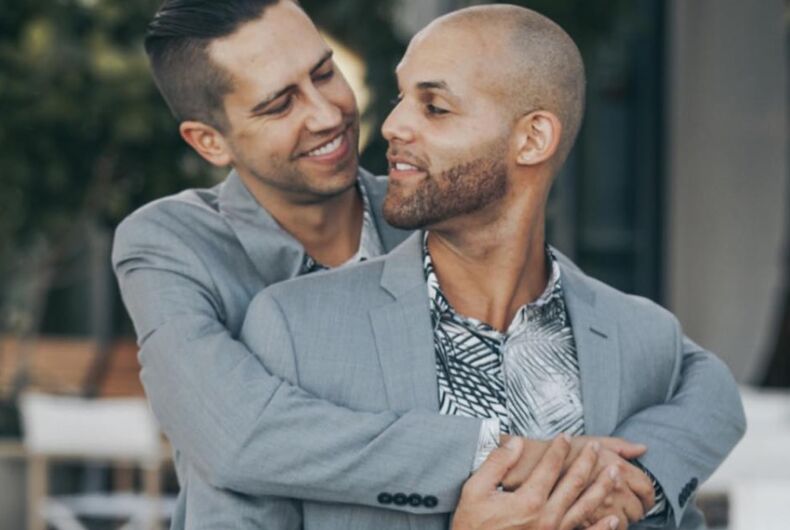 An Uber ride left one gay man injured as a homophobic driver allegedly dragged him down the street.

Taray Carey and his husband Alex Majkowski were headed to a bar with a friend late Tuesday night in Manhattan.

They ordered an Uber and the ride was uneventful, until the end when Cary, 27, and Majkowski, 33, shared a quick kiss. That’s when the driver, who went by “Denis” on his Uber profile, got enraged.

Related: Judge sides with Uber driver who kicked a lesbian couple out of his car

Majkowski asked to be let out because, according to Carey, he “started driving like a moron.”

“His hatred of gays was beyond his self-preservation,” Carey told the New York Post.

They got out when the driver stopped at a red light. The friend got out first, but when Carey tried to get out, he was stuck in the seatbelt and Denis started driving again.

Carey was dragged for a quarter of a block. His hands and knees got scraped and got a welt on his head the size of a golf ball.

He eventually fell out of the car. Majkowski got out at the next red light.

“I’m not used to feeling so defenseless,” Carey said.

When police showed up, Carey said they laughed and said that it wasn’t a hate crime.

“[One officer] said, ‘You probably deserved it.’ It was insult to injury.”

The New York Police Department said that bodycam footage doesn’t show the victims being laughed at. The police say they are investigating a complaint for leaving the scene of an accident with injury.

Uber said that the driver’s account has already been suspended and that the couple was refunded their $17.46.

“What’s been reported is very concerning to us,” Uber said in a statement. “Uber does not tolerate any form of discrimination. The driver’s access to the app has been removed as we continue to investigate.”

A spokesperson for New York City’s Taxi and Limousine Commission said that they are investigating the incident as well.