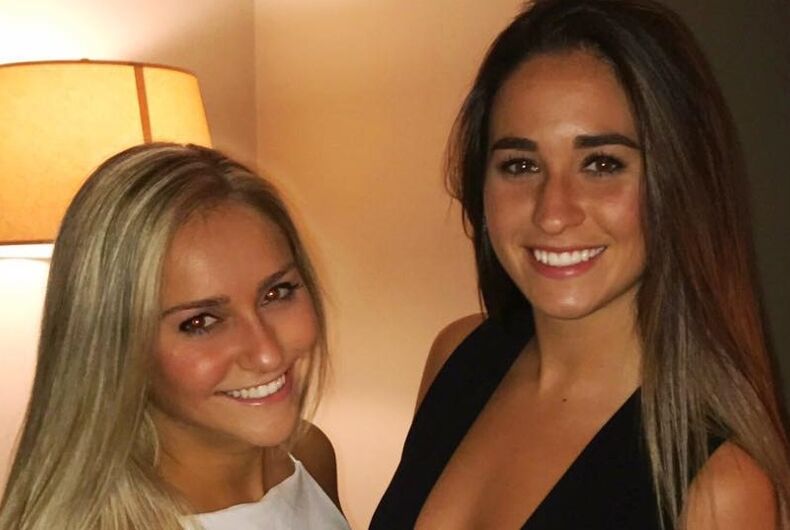 A lesbian couple in Manhattan says that they were kicked out of an Uber because they kissed and they have video. The ride was so bad, the company’s CEO said drivers like the one they got “don’t belong on Uber.”

Emma Pichl, 24, and her girlfriend Alex Iovine, 26, were taking an Uber into Manhattan last Saturday, when they kissed.

“We got over the Manhattan Bridge into the city,” Pichl told the New York Post. “We were sitting on opposite sides of the backseat. At one point we leaned over and pecked kiss, very fast.”

The women say that the driver soon pulled over, opened the doors, and said, “You should not do that. Do not do that.”

“He started yelling at us that we were disrespectful and inappropriate and that he wants us out of his car,” said Pichl. “We were going back and forth trying to understand.”

After they left the car, they confronted driver Ahmad El Boutari about it and he said that they were being “disrespectful.” One of the women pulled out her phone and started recording.

One of the women asked him what the issue was, and he said that kissing was “illegal” in a car.

“You don’t do that here in the car. You are not allowed to do this,” he can be heard saying.

One of the women said, “What are you fucking talking about? Are you sick in the head?”

After some back and forth, El Boutari apparently grabbed Pichl by the arm to get her phone.

“Get off of her phone. Don’t fucking touch her,” Iovine said. “I’m reporting you. I’m gonna get you fired.”

The driver then got back in the car and left. The couple was charged the full $22 for the ride.

“We were in shock. Definitely very shaken and upset. We always thought we lived in this untouchable New York City bubble where LGBTQ is so accepted,” Pichl said. “We never thought something like this would happen to us. It was a good lesson to show it can happen to you anywhere.”

“This is an open society and Uber is a platform that is available to anybody regardless of your background, your orientation, and that is sacred to us. It’s an unfortunate circumstance and we will do everything we can for that not to repeat.”

Celebrate Pride with this special video from Will & Grace