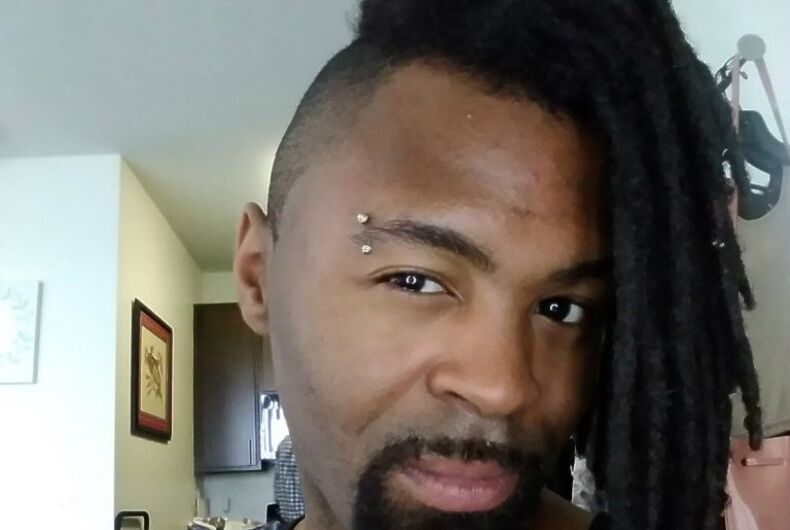 A gay, black man in D.C. said that he was kicked out of an Uber and had to face the police because he’s gay.

Chris Williams is a bartender on U Street. He ended his shift on June 27 and called an Uber to go home.

While he was being driven home, he received a call from his grandfather. He said that while he was talking, he used “tag words” like “honey” and “darling,” and the video of the confrontation shows that Williams has a stereotypically gay voice.

Williams said that it was when the driver heard the word “darling” that he stopped the car.

“As soon as [the driver] heard the word, darling, he has to pull over… I’m like, wait, this is new. This isn’t my stop,” Williams told Metro Weekly.

“He said ‘You literally actually need to get out of my car, because I’m not taking you anywhere.’ And, so I’m looking at this man, like, what, wait a minute. What’s wrong?”

“The way that you just treated me right now and I just sat here and looked at you and told you what the fuck is going on, and you want to sit here and be a bigot? Go ahead,” Williams said.

He started recording the interaction with his phone when the police arrived.

I am tired of this b*******. This man decided because I said darling that he wants to call the police because he doesn't want to take me home. This is an Uber driver who after I said the word darling decided that I am not fit to be in his car because I am a gay man. I responded with it is not that serious I'm just talking to you like a regular person. He didn't want to hear it after I said I was gay he decided he didn't want to take me home. Instead of just being honest and doing his job as an Uber driver he decided that he wanted to kick me out of the car in the middle of nowhere and call the policeto which I decided to film him. This is what happened. #bigotBob

The police did not file a report about the incident, and it took Williams 30 minutes to get another Uber to go home.

Williams posted the video to Facebook when he got home, and it has since been viewed over 7000 times. He used the hashtag #bigotbob, a reference to other nicknames assigned to people who call the police on African Americans for doing innocuous things like using a coupon or having a barbecue.

He also filed a complaint with Uber, which said that it would investigate the altercation.

“We have a clear non-discrimination policy and take these types of reports very seriously,” an Uber representative said. “We have a dedicated team that investigates all reports of discrimination and will take appropriate action.”

And the driver apparently did the same. Uber told Williams that the driver said that he was “overly flirtatious” and “used physical contact,” and he’s considering unspecified legal action.

Has Trump’s blatant toadying to Russia finally turned Fox News against him?