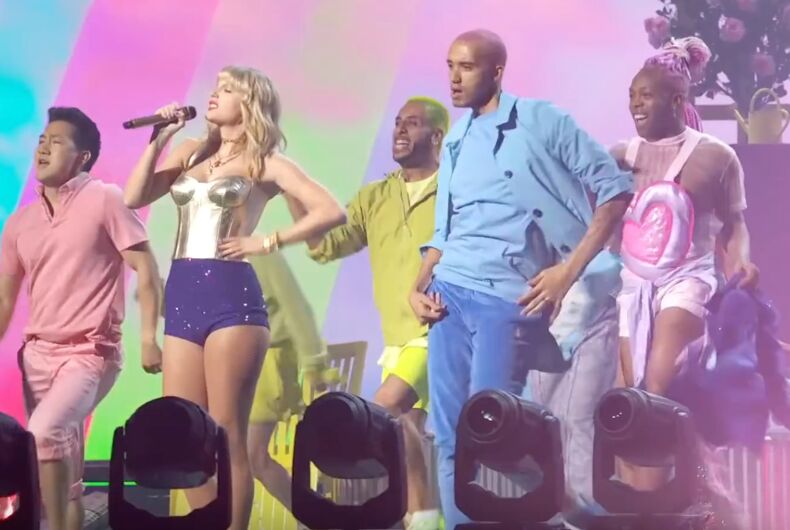 Taylor Swift turned the MTV Video Music Awards up to 11 when she opened the show with a performance of her new “gay anthem,” “You Need To Calm Down.” From Todrick Hall to drag queens, the number also included a big push for the Equality Act.

And when Swift won the award for Video of the Year, she accepted the trophy with the queens who appeared in the video standing behind her. Even more spectacular, she refused to perform unless they got their own Moonmen engraved with their names.

“My cast live their lives so authentically,” Taylor said in her acceptance speech. “Thank you for being the example that you are. We love you so much.”

“I just want y’all to know that Taylor Swift made sure that each and every one of us gets two Moonmen for the awards she won tonight,” Trinity K Bone’t posted on Instagram after the show. “[Taylor said] that she would not perform unless we got awards too. So I’m going to have two Moonmen in my house with my name on it for Video of the Year at the fucking VMAs!”

The singer has become a prominent ally of the LGBT community lately after revealing that her best friend didn’t know whether or not she supported equality. She said the confession stunned her and galvanized her to speak out more on civil rights issues. Earlier this year, she gave a major donation to an LGBTQ group to fight Tennessee’s ‘slate of hate’ laws.

Swift also made a push for the Equality Act during her acceptance speech – specifically calling out the Trump administration for ignoring a petition she started that’s garnered over half a million signatures.

“That’s five times the amount it would need to warrant a response from the White House,” she said as she pointedly looked at her watch.

But when it came time to accept the award for Video for Good, she turned the mic over to her best friend and YNTCD co-producer, Hall, who also gave a moving speech about overcoming what people say isn’t possible.

Taylor Swift got political during her 2019 MTV #VMAs acceptance speech for video of the year to call out the Trump administration's current lack of acknowledgment of the Equality Act petition for LGBTQ rights.https://t.co/Kd3otERFMG pic.twitter.com/LPSZxFMAEq

Congrats to @taylorswift13 and @todrick on winning Video For Good at the #VMAs!! pic.twitter.com/Q47a6bLk92