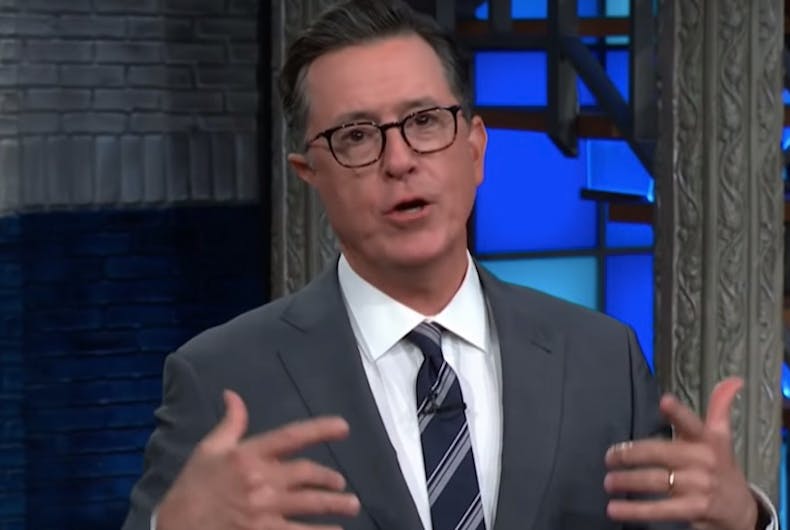 Late night host Stephen Colbert recently mocked straight men in a recent study who admitted that they don’t like recycling and using reusable cloth shopping bags for fear of being seen as gay.

“This isn’t just toxic masculinity. This is literally toxic.”

Related: No, Stephen Colbert will not be celebrating pride with the corpse of Jerry Lewis

He then mocked the idea that if a grocery checkout clerk asked a straight man if he’d brought his own cloth tote bag, the man might stammer sand say that he did it “once in college,” but it “was a fraternity initiation thing.”

“As a ruggedly heterosexual male,” Colbert continued, “I feel the responsibility to convince my fellow hairy-chested man-men that caring for the environment is butch as hell.”

He then entered a segment called the “Testoster-zone,” and tried to sex-up cloth tote bags and recycling containers by adding “boobs” to them.

Here’s a video of Colbert’s segment on straight guys who don’t recycle:

In the aforementioned study, men also said that they’d question the sexual orientation of women who did things they perceived as “masculine” like caulking windows. They also said such an activity would make the women seem less attractive.

In one of the studies, participants read fictional summaries of a person’s daily activities, which included pro-environmental behaviors. Participants then rated whether the person had masculine or feminine traits based on their specific behaviors and guessed what the person’s sexual orientation might be.

“If being seen as heterosexual is important to a person, that person may prioritize gender-conforming over gender-nonconforming pro-environmental behaviors in anticipation of how others might see them,” researcher Janet K. Swim said.