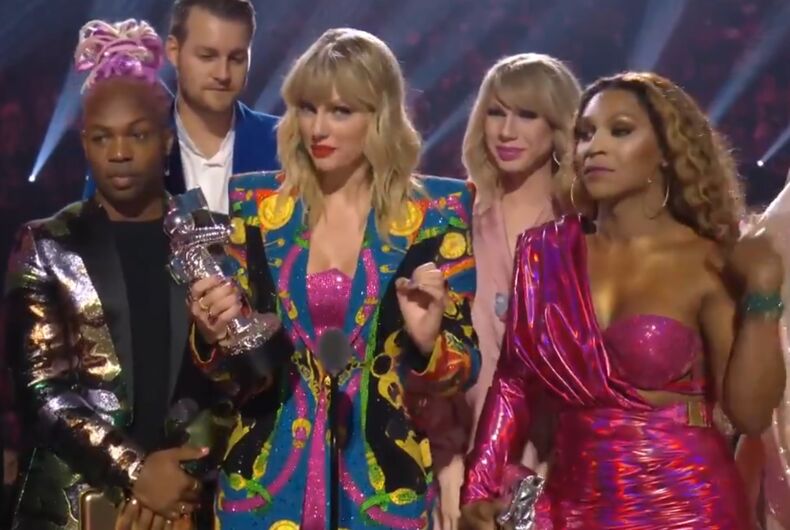 Conservatives have been attacking Taylor Swift for supporting LGBTQ equality at the Video Music Awards.

Swift won “Video of the Year” for You Need to Calm Down, a video that featured a number of LGBTQ artists and performers like Todrick Hall, Jesse Tyler Ferguson, and Laverne Cox.

At the end of the video were links to petitions to support the Equality Act, which would add sexual orientation and gender identity to existing federal civil rights legislation, creating protections for LGBTQ people in employment, housing, and other areas of potential discrimination.

“In this video, several points were made, so you voting for this video means that you want a world, where we’re all treated equally under the law,” Swift said when accepting her award. “At the end of this video, there was a petition, and there still is a petition for the Equality Act, which basically just says we all deserve equal rights under the law.”

“It now has half a million signatures, which is five times the amount that it would need to warrant a response from the White House.”

CONGRATS @taylorswift13 on her SECOND time winning VIDEO OF THE YEAR #VMAs pic.twitter.com/l8TOibbTTr

The White House has already said that it opposes the Equality Act. This isn’t surprising – Republicans oppose civil rights laws for LGBTQ people in courts, in state governments, and in federal agencies. It is entirely predictable that they also oppose the Equality Act.

But the White House issued a statement saying that it actually would really, really love to support the Equality Act, it’s just filled with “poison pills.”

“The Trump administration absolutely opposes discrimination of any kind and supports the equal treatment of all; however, the House-passed bill in its current form is filled with poison pills that threaten to undermine parental and conscience rights,” said gay White House Deputy Press Secretary Judd Deere.

But that’s not what the expression “poison pills” means. A poison pill in legislation is an amendment added by someone who opposes a bill that renders the bill ineffective or unpalatable to its supporters, with the intent of killing the bill.

The fact that the Equality Act bans discrimination – even against people the White House believe have a right to discriminate against LGBTQ people – is just the legislation doing its job, not a poison pill.

White House advisor Kellyanne Conway also said that Swift’s fans are too stupid to understand what the Equality Act does.

“I would love to just survey the audience if they know what that even is, what the Equality Act is and isn’t,” she said on Fox News.

Conway, who works for a former reality TV star, said that celebrities shouldn’t get involved in politics.

“I think that when Hollywood and singers… go political, it sounds in the moment like it’s very popular,” she said.

“And we have seen so many times where it backfires and it blows up,” she added, probably not referring to her employer.

When a journalist asked her why the White House opposes the Equality Act, she repeated the “poison pills” line.

“The president and the White House support equality, we don’t support pieces of legislation that have poison pills in it that can harm other people.”

Fox & Friends also dragged Swift. They invited conservative commentator Allie Beth Stuckey, who said that Swift was more charming before she started speaking out for LGBTQ equality this past year.

“People like them, especially people like Taylor Swift — the beauty, the charm of them is that they were politically neutral. At least that’s true for Taylor Swift,” she said. “Now she’s kind of waded into these political waters, and it doesn’t seem like they really know what they’re talking about.”

One would think that the people who don’t even know what the expression “poison pill” means wouldn’t be criticizing others for being politically ignorant.

Did Old Navy force some employees out of sight when ‘Queer Eye’ came to film in a store?