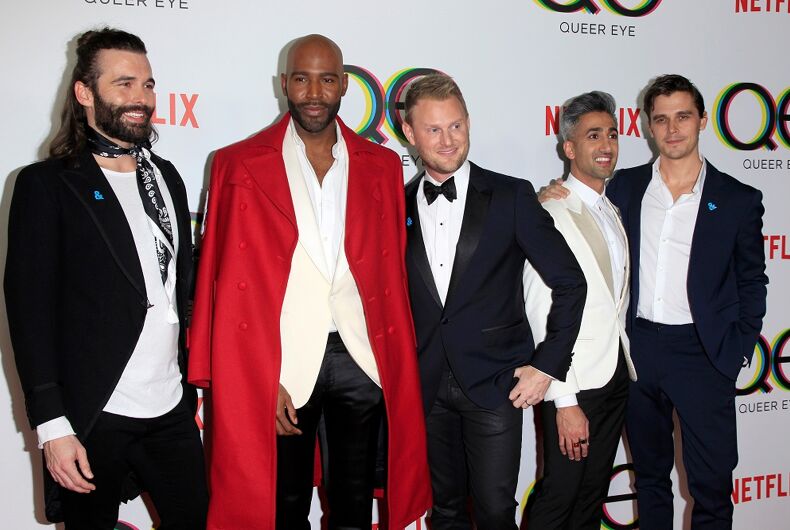 Several Old Navy employees of color in Philadelphia say that they were forced to go to the back of the store and stay out of sight when Netfix’s Queer Eye filmed a segment in the store while white employees who were brought in from other locations took their place.

Queer Eye is currently filming its fifth season, and a segment on an episode will take place at the Old Navy in Philadelphia’s City Center.

After the segment was filmed, one employee, Monae Alvarado, posted on Facebook accusing the store of bringing in white people and hiding the people of color who work in the store.

She and her coworkers “did an overnight to help make the store look beautiful,” she said, writing that the employees at her store are “nothing but people of color.”

Related: ‘Queer Eye’ fans are sending a lesbian back to college after her parents disowned her

She said that workers were brought in from other locations in the region “and they were all white.”

“They had us standing in the back not to be seen while the other workers from another store get to work on our floor like it’s their store.”

Two other employees confirmed to Philadelphia Magazine what had happened.

“Most of us worked additional overnights to make the store look top-notch,” another employee at the Old Navy location, who did not want to be named, said. “Corporate brought in new clothes, signs, and repainted parts of the store. We had to hide all tags under clothes and fold everything a certain way to make the place look spotless.”

“We were under the impression from our managers that we would be filmed and to remain professional. I was super-excited up until the day of and a random group of white folks came in to replace us at our own store.”

“I felt the racism the moment I was being told by managers to go to sections of the store that I usually don’t work around,” yet another employee of color said. “It became clear that we weren’t going to be filmed because we hadn’t been asked to sign consent forms, and they made it a point to keep us as far away from the cameras as possible. Most of the staff and managers at our store location are black.”

“At Old Navy, we celebrate the diversity of our teams and our customers and foster an environment of inclusion and belonging,” Old Navy said in a statement.

The statement said that they “worked with additional employees in the area to help ensure the store ran seamlessly for customers, as the location was open for business during filming, and we expect they may appear in background shots. These individuals are reflective of our diverse employee population.”

“We would never select employees to participate – or not – based on race. That is completely inaccurate and against the values we stand for as a company.”

Citing an unnamed source who is close to the production of Queer Eye, Philadelphia Magazine reports that neither the show’s producers nor Netflix gave any direction to Old Navy about who should be working at the store during the segment.

“I don’t know what happened behind the scenes, or overnight, but what I can tell you is that there [is] no way I would ever have allowed production to move POC to the back,” he wrote. “I should also mention that I had one person join me on camera, from Old Navy. She was African American. This is the last I will say on this matter.”

In a statement, Netflix confirmed that one African American employee appeared in the segment.

But the employees of the store wonder why white employees needed to be brought in.

“Having one black person featured on the show when most of us already work there full time is a slap in the face,” said one of the unnamed employees who talked to Philadelphia Magazine. “They would all be better off saying they didn’t want a bunch of black people on their show because they thought it would be ghetto. I’ve seen Queer Eye — they don’t have too many of us on there like that.”