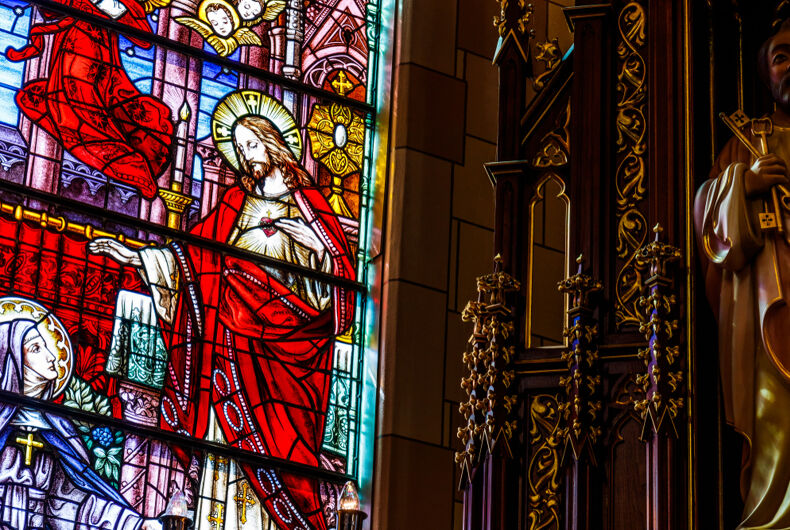 Indianapolis Archbishop Charles Thompson, who ordered the mass firing of any teachers at the diocese’s schools, also had no problem allowing school administrators to threaten a gay student with expulsion if he didn’t stop speaking out for social justice.

“To effectively bear witness to Christ, whether they teach religion or not, all ministers in their professional and private lives must convey and be supportive of Catholic Church teaching,” the archdiocese said in a statement sent last week.

Last year, Shelly Fitzgerald, a guidance counselor for 15 years at Roncalli High School in Indianapolis, was placed on administrative leave when someone found her marriage certificate that showed that she was married to a woman. She was later fired as part of a multi-school purge of gay and lesbian faculty.

Then-senior Dominic Conover was one of the most vocal critics of the decision.

Now that he’s graduated, Conover says the school threatened him with expulsion if he didn’t stop speaking out during a meeting last February. He says he was left with no choice but to quiet down.

“Basically, they said I crossed a bunch of lines a bit too much and I couldn’t be crossing lines further if I wanted to graduate,” Conover told WTHR News. “I was terrified.”

The school recently issued a new bullying and harassment policy that critics say could be used to stifle pro-LGBTQ speech off campus by students and faculty.

“In order to protect students, employees, volunteers and the school, each student is expected to treat the good name and reputation of other students, school employees, volunteers and the school with dignity and respect and not engage in any activity or conduct, either on campus or off campus, that is in opposition to this guideline and/or inconsistent with the Catholic Christian principles of the school, as determined by the school in its discretion,” an announcement in the school newsletter reads.

“Any derogatory, slanderous, hostile or threatening remarks or actions directed toward any of the above by a student will be seen as a violation of this policy and will be viewed as a serious matter.”

“I think it was a warning to the students that if you follow the footsteps of Dominic and start speaking out about the injustice you’re experiencing, it’s written right there, probable expulsion,” Conover said.

The school wouldn’t admit to bullying Conover into silence, but defended their right to do so in a statement to WTHR. Even more cowardly, they use the Constitution as a shield for their discrimination and ongoing crusade against students and faculty who don’t toe the line.

“All schools have the right to set standards for student conduct and consequences for misconduct,” a spokesperson said. “The U.S. Constitution protects the rights of private religious schools to establish rules for its students, faculty and staff that support the schools’ religious mission.”