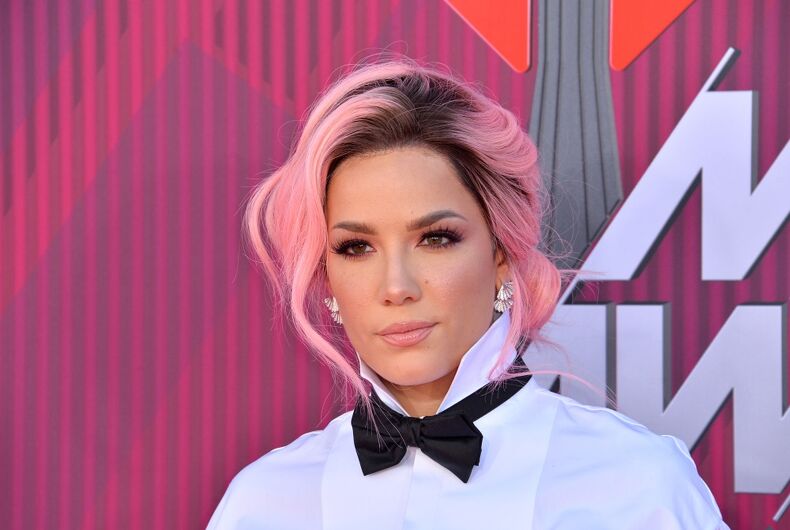 Out singer Halsey had some great clapbacks to haters who were attacking Miley Cyrus’s pansexuality.

Over the weekend a representative for Cyrus announced that she was separating from her husband of less than a year, Liam Hemsworth. Pictures of Cyrus kissing Kaitlynn Carter, ex-wife of Brody Jenner and ex-daughter-in-law of Caitlyn Jenner, appeared in tabloids.

Both Cyrus and Hemsworth have been photographed without their wedding rings and may have already been separated for some time.

Related: Miley Cyrus teamed up with Converse for a new Pride sneaker collection

Miley fans are mostly in mourning, but some people on the internet decided to attack her. A random on Twitter who calls himself a “destroyer of SJWs” said that those pictures with Carter are proof that Cyrus cheated, and, even more, are proof that bisexual people are “greedy” and shouldn’t be dated.

#MileyCyrus splitting and allegedly cheating on Liam with a woman confirms that you shouldn’t date bi people. Not offensive, just true. Bi is greedy and never satisfied.

Halsey, who is bi, destroyed the destroyer of SJW’s.

“Stop being afraid of women who aren’t afraid to do what pleases them and not other people,” the singer tweeted.

Hey tigerbob. Doesn’t surprise me that ur saying this and ur page has u crying about Brie Larson too! Stop being afraid of women who aren’t afraid to do what pleases them and not other people :-) https://t.co/uPyB1cXE0D

Another person on Twitter then used a different and contradictory biphobic sentiment against Halsey. Now, instead of bi people being “greedy” and unable to control their desires for others, they’re fake and don’t actually desire anyone of the same sex.

Halsey responded to his boldness.

bold of u to assume I haven’t been intimate with most of the women “on my side” 🤷🏻‍♀️ https://t.co/jM54Lka3UG

Miley Cyrus has been posting more pics with Kaitlynn Carter to social media and joking with Brody Jenner. Liam Hemworth, though, has been keeping out of the public eye.