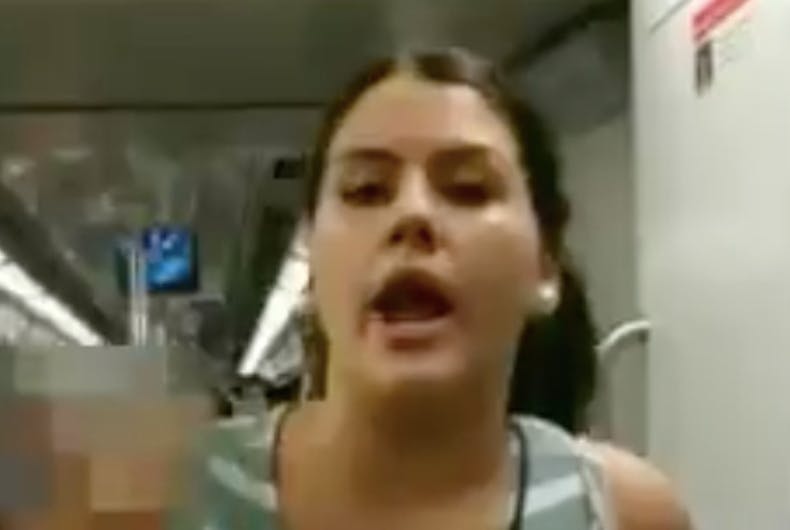 This week, a woman pushing a stroller went absolutely bonkers upon seeing two lesbian women kiss on a subway in Barcelona, Spain. One of the lesbians, Carla Gallén, posted video of the lesbophobe’s rant online.

In a tweet (below), Gallén wrote, “On Wednesday afternoon, my partner and I suffered homophobic aggression on the underground. A woman insulted and attacked us for kissing.”

In the video, the woman uses slurs and insults against the lesbian couple and even calls her own gay brother a “f*ggot.” Here are some of her hateful lines from the video:

D*ke, d*ke what are you going to do with a video? … You disgust me, I have a gay brother, but he doesn’t kiss in front of me because he respects me….

If you want respect, you also have to respect me… Stop recording or I’ll take your phone…. This c*cksucker is recording me.

Gallén said, “Insults and threats continued for 10 minutes. In the middle of a wagon full of people. Nobody moved a finger. It is very easy to put ‘badges’ on the day of Pride, but LGBTQIA + people continue to suffer daily violence with this type of aggression.”

Gallén and her partner reportedly told police about the incident as well as the Observatory Against Homophobia, a regional organization which monitors anti-LGBTQ discrimination.

Related: A man was caught on video tearing down a Pride flag, beating it & shouting slurs

This video of public harassment comes barely a week after another video went viral of a homophobe at McDonald’s threatening to “beat the gay out of” a gay man during Barcelona Pride weekend. The homophobe was enraged over the gay man’s clothing which he considered to be inappropriate even though it was merely denim overalls and a bright green tank top.

Both videos show bigots and their irrational pre-occupation with policing people’s gender expression.

Should cis actors like Scarlett Johansson be allowed to play trans roles?